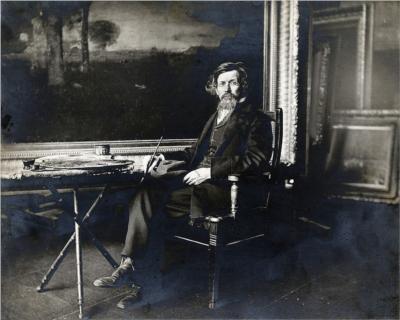 George Inness was an influential American landscape painter. His work was influenced, in turn, by that of the old masters, the Hudson River school, the Barbizon school, and, finally, by the theology of Emanuel Swedenborg, whose spiritualism found vivid expression in the work of Inness' maturity. Often called "the father of American landscape painting," Inness is best known for these mature works that not only exemplified the Tonalist movement but also displayed an original and uniquely American style.

One of the most influential American artists of the nineteenth century, Inness was influenced, in turn, by the Old Masters, the Hudson River school, the Barbizon school, and, finally, the theology of Emanuel Swedenborg, whose spiritualism found vivid expression in the work of Inness's maturity (1879–1894).

Although Inness’s style evolved through distinct stages over a prolific career that spanned more than forty years and 1,000 paintings, his works consistently earned acclaim for their powerful, coordinated efforts to elicit depth of mood, atmosphere, and emotion. Neither pure realist nor impressionist, Inness was a transitional figure who intended for his works to combine both the earthly and the ethereal in order to capture the complete essence of a locale. A master of light, color, and shadow, he became noted for creating highly ordered and complex scenes that often juxtaposed hazy or blurred elements with sharp and refined details to evoke an interweaving of both the physical and the spiritual nature of experience. In Inness’s words, he attempted through his art to demonstrate the "reality of the unseen” and to connect the "visible upon the invisible."

Within his own lifetime, art critics hailed Inness as one of America's greatest artists. Often called "the father of American landscape painting," Inness is best known for his mature works that not only exemplified the Tonalist movement but also displayed an original and uniquely American style.

George Inness was born in Newburgh, New York. He was the fifth of thirteen children born to John William Inness, a farmer, and his wife, Clarissa Baldwin. His family moved to Newark, New Jersey when he was about five years of age. In 1839 he studied for several months with an itinerant painter, John Jesse Barker. In his teens, Inness worked as a map engraver in New York City. During this time he attracted the attention of French landscape painter Régis François Gignoux, with whom he subsequently studied. Throughout the mid-1840s he also attended classes at the National Academy of Design, and studied the work of Hudson River School artists Thomas Cole and Asher Durand; "If," Inness later recalled thinking, "these two can be combined, I will try." He debuted his work at the National Academy in 1844.

Inness opened his first studio in New York in 1848. In 1849, he married Delia Miller, who died a few months later. The next year he married Elizabeth Abigail Hart, with whom he would have six children.

In 1851 a patron named Ogden Haggerty sponsored Inness' first trip to Europe to paint and study. Inness spent fifteen months in Rome, where he studied landscapes by Claude Lorrain and Nicolas Poussin. He also rented a studio there above that of painter William Page, who likely introduced the artist to Swedenborgianism. In 1853 he was elected into the National Academy of Design as an Associate member and became a full Academician in 1868.

During trips to Paris in the early 1850s, Inness came under the influence of artists working in the Barbizon school of France. Barbizon landscapes were noted for their looser brushwork, darker palette, and emphasis on mood. Inness quickly became the leading American exponent of Barbizon-style painting, which he developed into a highly personal style. In 1854 his son George Inness, Jr., who also became a landscape painter of note, was born in Paris.