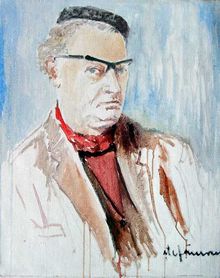 Painter’s destiny was forged during his school-years spent at Râmnicul Sărat; then, between 1933 and his mobilization on the front, the advice he received from masters Ion Theodorescu-Sion, Lucian Grigorescu and especially Nicolae Dărăscu mattered a lot. The latter, a palette virtuoso able to display a whole scale of hot-and-cold floral colours, made George Ştefănescu familiar with the secret of polychromy acquired patiently, by touch resuming, yet losing nothing of image luminosity.

The seisms of the mid 20th-century history directed Ştefănescu towards plastic expressions with practical potentials: mural painting and decoration, advertising graphics, poster and especially scenography. His creation dedicated to theatre (1958–1974) re-adapted his sight to strong colours, as, for more than one decade, his perception had been harmed by the traumas endured in the Crimean campaign. Subsequently, the synthetic, ultra-suggestive manner of the graphic-pictorial sketches made for décors trained his interest for the poetic simili-figurative compositions whose folkloric approach used to conceal religious subjects – see the series of Minstrels or Flyers, which, resumed after 1990 in the free world, far from the local manoeuvres of the orthodox connivances, were turned into The Magi and Crucifixions after minimal interventions.

In Adriana Bobu’s monograph issued in 1987 at Meridiane Publ. House (Bucharest, Romania), the artist is approached in the key of a fauve, harmonically tamed expressionism. Without any ostentation, the painter captures from reality an extended cone of pretext stimuli, achieving a figuration stylized in arched-and-imbricated shapes resembling enamel compositions. An excellent example could be the canvas made in 1990: a whirl of tropical, strongly coloured birds developing an elaborate honest-figurative dynamics. More than any landscapist, Ştefănescu-Râmnic imagines parabolic-woven figures (meditative themes, harlequins, folk customs, dances), sublimated in graphemes mastered in the realm of lyrical abstraction. On the other hand, his still-lifes or toponymic landscapes are abundant of pretexts for different families of ripen nuances and contour arabesques.

Secret of Blue is the title of the oil on canvas he achieved in 1983. But maybe even the red colour of old Balkan carpet stands for the sthenic leitmotif the painter had in mind. In the more recent series, showing a somehow thwarted abstract symbolism, the artist honours shape contours with a loosened-up warp background, while troubling sensually into the enamel depth of the painting.
Painter’s figure, seems meditative and concentrated in the remarkable self-portraits of the man born during the Great War, seriously wounded in the Second World War, yet surviving United Europe enactment. The longeval artist is a wonderful example of seigniorial senescence nourished by a destiny able to defeat evil times, that Sadness of Young Women from the middle of the 20th century. (Aurelia Mocanu)

George Ştefănescu was born in 1914 in the commune of Plăineşti (now Dumbrăveni, Vrancea), between the cities of Focşani and Râmnicu Sărat. His father Gheorghe was descended from a Macedonian family from Bitola, Macedonia. His mother, Sanda, born Căţănaru, was originally from the commune of Crucea de Jos, Vrancea County. From 1926 to 1933 he attended the secondary school in Râmnicu Sărat. His art teacher recommended him to the church painter Constantinescu and he became the latter's apprentice after school. In 1933, after receiving his baccalaureate, he moved to Bucharest. He took lessons with the painter Ion Theodorescu-Sion, a noted personality in the Romanian art world, for the entrance examination of the Academy of Creative Arts. From 1933 to 1936 he studied at the Academy of Creative Arts in Bucharest in the class of the painter Nicolae Dărăscu.

In 1936, he had his first solo exhibition in a Bucharest art gallery, and also took a study trip to Vrancea and Balcic. In 1937 he attended artillery officer's school, had an exhibition in Craiova with the writer Ion Ionescu; the latter presented his novel Oameni cu buche ("Men with books" / "Literate men"). That year, he also began to sketch designs for women's clothing and fashion accessories for a Bucharest fashion house. He worked for the construction company SONACO, became a member of Sindicatul Artistilor din România (the Union of Romanian Artists, which included painters, sculptors and graphic artists) and because a student at the well-known private art seminar "Zapan". His professors there were well-known painters such as Lucian Grigorescu, Platon Cazanovici and Mihail Gheorghita.

In 1938, together with the fresco painter Alexandru Mazilescu he worked painting murals. In Bukovina, he had the opportunity to observe the well-known wall paintings of the painted monasteries. From 1940 to 1944 he served in the Romanian military during World War II, with a corps that advanced as far as Crimea. During the Axis retreat, his horse stepped on a mine, which exploded, killing the horse, and leaving him with a serious head wound that, for over a decade, left him unable to distinguish colors, which mean that he could not paint and had to seek other work. In 1945 he participated in seminars in theatre directing and set design at ARLUS, led by Professor Ion Sava. He was the teacher of the painter Zwy Milshtein.

In 1946–1947 he was employed at the film production company Filmul Popular, who had a laboratory in Bucharest on Strada Scaune. He worked with some Hungarian specialists to modernize this film laboratory, eventually becoming head of the laboratory. As a result, he was assigned to modernize a film laboratory in Mogoşoaia, owned by the National Tourism Office (Oficiul National de Turism, ONT). The Mogoşoaia laboratory had been wrecked in the bombardament toward the end of the War. This time, he had to do the job without professional Hungarian help.

During his time at the ONT laboratory (1948–1951), he also founded his own advertising studio for the film industry.