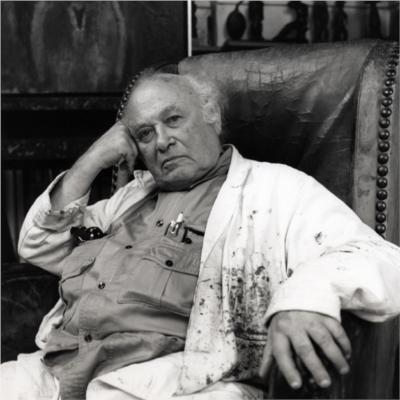 Josef Herman OBE (3 January 1911 – 19 February 2000), was a highly regarded Polish-British realist painter who influenced contemporary art, particularly in the UK. His work often had subjects of workers and was inherently political. He was among more than a generation of eastern European Jewish artists who emigrated to escape persecution and worked abroad. For eleven years he lived in South Wales.

Herman was born in Warsaw, Poland into a Jewish family, on 3 January 1911. He attended the Warsaw School of Art for two years before working briefly as a graphic artist.

In 1938 at the age of 27, Herman left Poland for Brussels to escape anti-Semitism. He was introduced to many of the prominent artists then working in the city. After the beginning of World War II and the German invasion of Belgium, he escaped to France and then to Great Britain. He first lived in Glasgow before moving to London for a time. There he met numerous other European émigrés, such as the Hungarian Michael Peto, with whom he became friends. When Peto decided to go into photography after the war, Herman encouraged him in his new endeavor and supported his progress as a photojournalist.

Herman's own style was bold and distinctive, involving strong shapes with minimal detail. He continued to work up to his death in 2000.

Herman studied working people as the subjects of his art, including grape pickers, fishermen and, most notably, coal miners. The latter became a particular interest for Herman during the eleven years that he lived in Ystradgynlais, a mining community in South Wales, beginning in 1944. He became part of the community, where he was fondly nicknamed "Joe Bach". Among his creative collaborators and friends in Wales was the artist Will Roberts, who lived in Neath.

When commissioned in 1951 to paint a mural for the Festival of Britain, Herman took coal miners as his subject. His work Miners (1951) showed six men resting above ground after their work. Herman said, "I think it is one of my key pictures and the most important one I did in Wales." The mural is held in the permanent collection of the Glynn Vivian Art Gallery, affiliated with the Swansea Museum.

Some of Herman's work was collected by the Davies sisters, British art patrons and collectors in Wales, as part of their 20th-century holdings. They bequeathed their joint collection of 260 works, particularly strong in Impressionist and post-Impressionist paintings and sculptures, to the National Museum Wales in the mid-20th century, greatly expanding its range.

Leaving Wales in 1955 because his health was affected by the damp climate, Herman lived briefly in Spain and then in London. All the same, he won the Gold Medal for Fine Art at the 1962 Wales National Eisteddfod.

In 1955 he moved to Suffolk with his partner, Nini Ettlinger, whom he married in 1961. The tragic death of their young daughter prompted them to move away and from 1972 Herman lived in the house in West London where he died in February 2000.