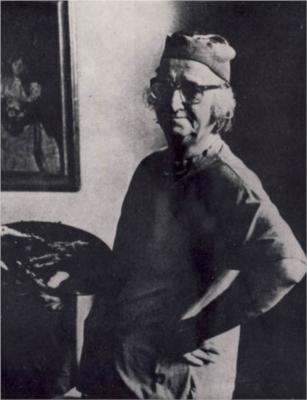 Corneliu Baba (Romanian pronunciation: [korˈnelju ˈbaba] ( listen); 18 November 1906, Craiova – 28 December 1997) was a Romanian painter, primarily a portraitist, but also known as a genre painter and an illustrator of books.

Having first studied under his father, the academic painter Gheorghe Baba, Baba studied briefly at the Faculty of Fine Arts in Bucharest, but did not receive a degree. His first public exhibition was in 1934 in the spa town of Băile Herculane; this led to his studying later that year under Nicolae Tonitza in Iaşi, finally receiving a diploma in Fine Arts from the faculty at Iaşi in 1938, where he was named assistant to the Chair of Painting in 1939 and a Professor of Painting in 1946.

Shortly after his 1948 official debut with a painting called The Chess Player at the Art Salon in Bucharest, he was arrested and briefly imprisoned in Galata Prison in Iaşi. The following year he was suspended without explanation from his faculty position and moved from Iaşi to Bucharest.

Despite an initially uneasy relationship with communist authorities who denounced him as formalist, Baba soon established himself as an illustrator and artist. In 1955 he was allowed to travel to the Soviet Union, and won a Gold Medal in an international exhibition in Warsaw, Poland. In 1956, Baba accompanied The Chess Player and two other paintings showed at the Venice Biennale, after which the paintings traveled on to exhibits in Moscow, Leningrad, and Prague.

In 1958 Baba was appointed Professor of Painting at the Nicolae Grigorescu Institute of Fine Arts in Bucharest, where Niculiţă Secrieriu and Ștefan Câlția were among his pupils. The same year he received the title of Emeritus Master of Art. By this time, his earlier problems with the communist authorities appear to have been smoothed over. In the next decade, both he and his paintings were to travel the world, participating in exhibitions in places as diverse as Cairo, Helsinki, Vienna, and New Delhi, culminating in a 1964 solo exhibition in Brussels. In 1962, the Romanian government gave him the title of People's Artist; in 1963 he was appointed a corresponding member of the Romanian Academy, and in 1964 was similarly honored by the East Berlin Academy of Fine Art.

Honors and exhibitions continued to accumulate, ranging from a 1970 solo exhibition in New York City to the receipt of a Red Star decoration in 1971. While his name became a household word in Romania and, to a lesser extent, throughout the Eastern bloc, he never achieved comparable fame in the West.

In 1988, Baba was seriously injured by an accident in his studio, and was immobilized for several months. In 1990, following the Romanian Revolution, he was elevated to titular membership in the Romanian Academy. Shortly before his death in 1997, Baba published his memoir, Notes by an Artist of Eastern Europe. He was posthumously awarded the Prize for Excellence by the Romanian Cultural Foundation.

Corneliu Baba appears in the People of influence painting of Chinese artists Zhang An, Li Tiezi, and Dai Dudu.