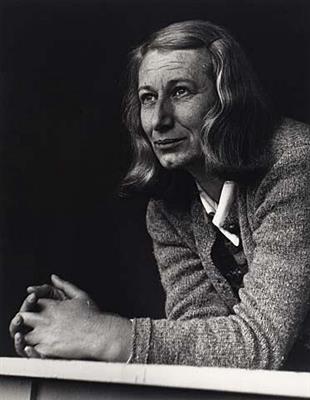 Rita Angus (12 March 1908 – 25 January 1970) was a New Zealand painter. Along with Colin McCahon and Toss Woollaston, she is credited as one of the leading figures in twentieth century New Zealand art. She worked primarily in oil and water colour, and is well known for her portraits and landscapes.


Henrietta Catherine Angus was born on 12 March 1908 in Hastings, the eldest of seven children of William McKenzie Angus and Ethel Violet Crabtree. In 1921, her family moved to Palmerston North and she attended Palmerston North Girls' High School (1922–26). In 1927, she began studying at the Canterbury College School of Art. She never completed her diploma in fine arts but continued to study until 1933, including classes at the Elam School of Fine Arts in Auckland. During her studies she was introduced to renaissance and medieval art and received traditional training in life drawing, still life and landscape painting.


Angus married Alfred Cook, a fellow artist, on 13 June 1930, but they separated in 1934, and divorced in 1939. Angus signed many of her paintings as Rita Cook between 1930 and 1946, but after she discovered in 1941 that Alfred Cook had remarried, she changed her surname by deed poll to McKenzie, her paternal grandmother's surname. As a result, some of her paintings are also signed R. Mackenzie or R. McKenzie, but the majority are signed Rita Angus.


After a short period teaching art in Napier, Angus lived mostly in Christchurch during the 1930s and 1940s. In the late 1940s she suffered from mental illness and entered Sunnyside Mental Hospital in 1949. In 1950 she moved to Waikanae to convalesce, and then settled in Wellington in 1955.


Among Angus' influences were Byzantine art and cubism. She was also influenced by the English painter Christopher Perkins' 1931 painting of Mount Taranaki, a response to New Zealand's distinctive clear lighting. Her landscapes came in a time when many people were concerned to create a distinctly New Zealand style, but Angus herself was not interested in defining a national style so much as her own style. Her paintings are clear, hard-edged and sharply-defined. In the 1930s and 1940s she painted scenes of Canterbury and Otago. One of the most famous of these is Cass (1936) in which she portrayed the bare emptiness of the Canterbury landscape using simplified forms and mostly unblended colours arranged in sections in a style remiscent of poster art. Cass was voted New Zealand's most-loved painting in a 2006 television poll.


For a while, she lived next to the artist Leo Bensemann. Their adjacent flats became something of a hub of the local art scene and it is said that they spurred each other on in their art. It has been stated that Angus produced some of her finest pieces during this time including many portraits.


Angus' pacifist beliefs can be seen in her art of the 1940s, when she avoided any kind of war work. Angus stated, "As an artist it is my work to create life and not to destroy it." She created three goddess images symbolizing peace of which "Rutu" is the most well known.