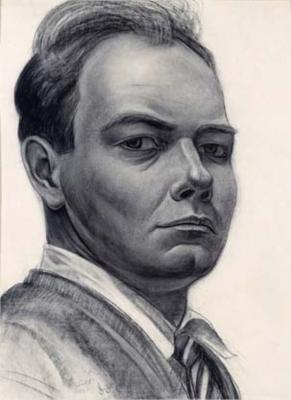 John Steuart Curry (November 14, 1897 – August 29, 1946) was an American painter whose career spanned the years from 1924 until his death. He was noted for his paintings depicting life in his home state, Kansas. Along with Thomas Hart Benton and Grant Wood, he was hailed as one of the three great painters of American Regionalism of the first half of the twentieth century.

Curry's artistic production was varied, including painting, book illustration, prints and posters. For a further discussion of his artistic pieces as individual works, see Artwork by John Steuart Curry.

Curry was born on a farm in Dunavant, Kansas, November 14, 1897. He was the eldest of five children to parents Smith and Margaret Curry. Despite growing up on a Midwestern farm, both of Curry's parents were college educated and had even visited Europe for their honeymoon. Curry's early life consisted of caring for the animals on the farm, attending the nearby high school and excelling in athletics. His childhood home was filled with many reproductions of Peter Paul Rubens and Gustave Doré, and these artists' styles played a significant role in crafting John Curry's own style.

His family was very religious as were most people in Dunavant. Curry was encouraged to paint animals around the farm and at the age of twelve he had his first art lesson. In 1916 John entered the Kansas City Art Institute, but after only a month there he transferred to the Art Institute of Chicago, where he stayed for two years. In 1918 he attended Geneva College in Beaver Falls, Pennsylvania. After he graduated, Curry worked as an illustrator from 1921 to 1926. He worked for several magazines including Boys' Life, St. Nicholas, County Gentleman,and The Saturday Evening Post.

In 1926 Curry spent a year in Paris studying the works of Gustave Courbet, and Honoré Daumier as well as the color techniques of Titian and Rubens. After his return to the United States he settled in New York City and married Clara Derrick, shortly thereafter they moved to Westport, Connecticut in 1924. Clara died in June 1932 and for the next two years Curry devoted his time to working in his studio. He traveled with the Ringling Brothers Circus and during his time with them created his painting The Flying Cadonas. He remarried in 1934 to Kathleen Gould. The Federal Art Project was instituted in 1934 as a way to give work to artists and alleviate the effects of the Great Depression.

In 1936, Curry was appointed as the first artist-in-residence at the Agricultural College of the University of Wisconsin–Madison. He was free to travel throughout the state and promote art in farming communities by providing personal instruction to students. This same year he was commissioned to paint a mural for the Department of Justice Building and Main Interior Building in Washington. He was also commissioned by his home state of Kansas to paint a mural for the State Capitol at Topeka. In 1937, Curry was installed as the artist-in-residence at the University of Wisconsin in Madison. In 1937, he was elected into the National Academy of Design as an Associate member, and became a full Academician in 1943. Curry continued to work at the University of Wisconsin until he died of a heart attack at the age of 48 in 1946.