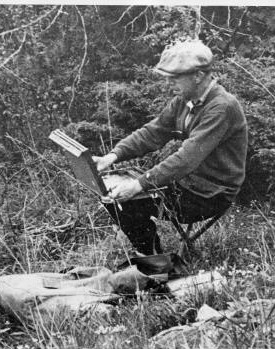 Franklin Carmichael (May 4, 1890 – October 24, 1945) was a Canadian artist and member of the Group of Seven. Though he was primarily famous for his use of watercolours, he also used oil paints, charcoal and other mediums to capture the Ontario landscapes of which he was fond. Besides his work as a painter, he worked as a designer and illustrator, creating promotional brochures, advertisements in newspapers and magazines, and stylizing books. Near the end of his life, Carmichael taught in the Graphic Design and Commercial Art Department at the Ontario College of Art (today the Ontario College of Art and Design).

The youngest original member of the Group of Seven, Carmichael often found himself socially on the outside of the group. Despite this, the art he produced was of equal measure in terms of style and approach to the other member's contributions, vividly expressing his spiritual views through his art.

Franklin Carmichael was born in 1890 in Orillia, Ontario. Even at a young age, his artistic talents were already apparent, and so his mother enrolled him in both music and art lessons.

As a teenager, Carmichael worked in his father’s carriage making shop as a striper. Decorating the carriages, he practiced his design, drawing and colouring skills.

In 1910, Carmichael arrived in Toronto at the age of twenty and entered the Ontario College of Art. There, he studied under William Cruickshank and George Reid. Among his fellow students was Gustav Hahn.

By 1911, he began working as an apprentice at Grip Ltd. making $2.50 a week. Late in the year, Lawren Harris and J. E. H. MacDonald began sketching together, soon to be joined by Carmichael and his coworkers at Grip, including Arthur Lismer, Tom Thomson and Frank Johnston. By 1913, the excursions also included Frederick Varley and A.Y. Jackson.

Carmichael moved to Antwerp, Belgium in 1913 to study painting at Académie Royale des Beaux-Arts. Due to the outbreak of World War I, he soon returned to his native Ontario to rejoin Thomson, Macdonald, Lismer, Varley and Johnston. Staying in Toronto during the war, they struggled in the depressed wartime economy.

During the fall of 1914, he moved into the Studio Building and shared a space with Thomson over the winter.

Carmichael and the members of the group were frustrated by their initial attempts to capture the untouched "savage" land of Canada, with the particular characteristics of the land difficult to capture in the European tradition. On this, Jackson wrote,

In April 1920, the Group of Seven was established by Jackson, Harris, MacDonald, Lismer, Varley, Johnston and Carmichael. The group held its first exhibition at the Art Gallery of Ontario in Toronto from May 7 to 27, 1920.