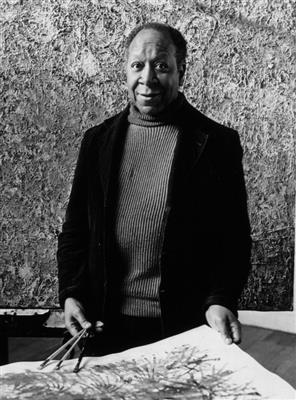 Beauford Delaney (December 30, 1901 – March 26, 1979) was an American modernist painter. He is remembered for his work with the Harlem Renaissance in the 1930s and 1940s, as well as his later works in abstract expressionism following his move to Paris in the 1950s. Beauford's younger brother, Joseph, was also a noted painter.


Beauford Delaney was born December 30, 1901 in Knoxville, Tennessee. Delaney's parents were prominent and respected members of Knoxville's black community. His father Samuel was both a barber and a Methodist minister. His mother Delia was also prominent in the church, and earned a living taking in laundry and cleaning the houses of prosperous local whites. Delia, born into slavery and never able to read and write herself, transferred a sense of dignity and self-esteem to her children, and preached to them about the injustices of racism and the value of education. Beauford was the eighth of ten children, only four of whom survived into adulthood. He summed up the reasons for this in a journal entry from 1961, saying "so much sickness came from improper places to live – long distances to walk to schools improperly heated… too much work at home – natural conditions common to the poor that take the bright flowers like terrible cold in nature…"


Beauford and his younger brother Joseph were both attracted to art from an early age. Some of their earliest drawings were copies of Sunday school cards and pictures from the family bible. "Those early years which Beauford and I enjoyed together I am sure shaped the direction of our lives as artists. We were constantly doing something with our hands – modelling with the very red Tennessee clay, also copying pictures. One distinct difference in Beauford and myself was his multi-talents. Beauford could always strum on a ukulele and sing like mad and could mimic with the best. Beauford and I were complete opposites: me an introvert and Beauford the extrovert." The Delaneys attended Knoxville's Austin High School, and among Beauford's early works was a portrait of Austin High principal Charles Cansler.


When he was a teenager, he got a job as a "helper" at the Post Sign Company. However, he and his younger brother Joseph were drawing signs of their own. Then some of his work was noticed by Lloyd Branson, an elderly American Impressionist and Knoxville's best known artist. By the early 1920s, Delaney became the apprentice of Branson. With Branson's encouragement, the 23-year-old Delaney migrated north to Boston to study art. With perseverance, he achieved the artist's education he desired, including informal studies at the Massachusetts Normal School, the South Boston School of Art and the Copley Society. He learned what he called the "essentials" of classical technique. It was also while in Boston that Delaney had his first "intimate experience" with a young man in the Public Garden. Through letters of introduction from Knoxville, he also received what he referred to as a "crash course" in black activist politics and ideas; having associated socially during his years in Boston with some of the most sophisticated and radical African-Americans of the time, such as James Weldon Johnson, writer, diplomat and rights activist; William Monroe Trotter, founder of the National Equal Rights League; and Butler Wilson, Board member of the National Association for the Advancement of Colored People. By 1929, the essentials of his artistic education complete, Beauford decided to leave Boston and head for New York.