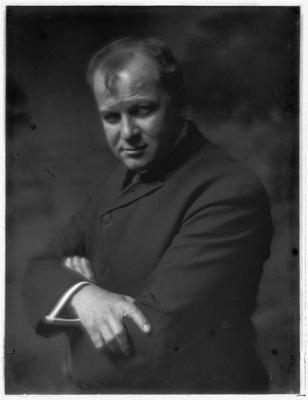 Luks was born in Williamsport, Pennsylvania, to Central European immigrants. His father was a physician/apothecary and his mother was an amateur painter and musician. The Luks family eventually moved to Pottsville, in southern Pennsylvania, near the coal fields. In this setting, he learned at a young age about poverty and compassion as he observed his parents helping the coal miners' families.

Luks began his working life in vaudeville. He and his younger brother played the Pennsylvania and New Jersey vaudeville circuit in the early 1880s while still in their teens. He left performing when he decided to pursue a career as an artist. Luks knew from a young age that he wanted to be an artist and studied briefly at the Pennsylvania Academy of the Fine Arts before he traveled to Europe, where he attended several art schools and studied the Old Masters. (He became a particular admirer of Spanish and Dutch painting, especially the work of Velazquez and Frans Hals.) Manet's energy and technique also appealed to Luks. Later he went to Düsseldorf, where he lived with a distant relative, allegedly a retired lion-tamer, and took classes at the Düsseldorf School of Art. He eventually abandoned Düsseldorf for the more stimulating spheres of London and Paris. In 1893, he returned to Philadelphia, where he eventually found work as an illustrator for the Philadelphia Press.

"Luks's experience as a Press artist-reporter proved seminal to his career, not so much for the work he accomplished as for the lifelong friends he acquired." Working at that newspaper, he met John Sloan, William Glackens, and Everett Shinn. These men would gather for weekly meetings, ribaldly social as well as intellectual, at the studio of Robert Henri, a talented painter several years their senior. Henri encouraged his younger friends to read Whitman, Emerson, Zola, and Ibsen as well as William Morris Hunt's Talks on Art and George Moore's Modern Painting. Chafing under the limitations of the Genteel Tradition, he wanted them to consider the need for a new style of painting that would speak more to their own time and experience. Henri was a persuasive advocate for the vigorous depiction of ordinary life; he believed American painters needed to shun genteel subjects and academic polish and to learn to paint more rapidly. In Luks, he had a ready listener but also a man who was never going to be comfortable in the role of acolyte.

In 1896, Luks moved to New York City and began work as an artist for Joseph Pulitzer's New York World, where one of his assignments was to draw the popular Hogan's Alley comic-strip series. Luks began drawing the Yellow Kid after its creator, Richard F. Outcault, departed the World for W. R. Hearst's New York Journal. During his time as an illustrator there, he lived with William Glackens. Along with Everett Shinn and Robert Henri, Glackens encouraged Luks to spend more time on his serious painting. What ensued were several productive years in which Luks painted some of the most vigorous examples of what would be called "Ashcan art."