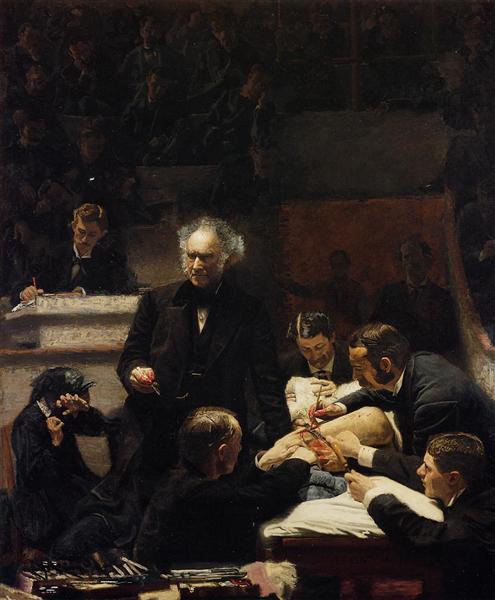 Thomas Eakins's deep connection to his birthplace remained a theme throughout his career. Perhaps his most well-known and ambitious work for the city of Philadelphia is The Gross Clinic, a painting completed in 1875 that spotlights the local physician Samuel David Gross. An intense scene is large in scale, measuring eight feet wide and over six feet across features Gross's teaching demonstration of a surgical procedure for the medical students. Five other doctors operate on a patient's infected thigh. This scientific endeavor contrasts sharply with the emotional reaction of the lone woman in the scene, presumably the patient's mother. Behind the operation on the right side of the painting, two figures watch the proceedings from the shadow of the room's doorway.

The painting evokes Rembrandt's art historical precedent The Anatomy Lesson of Dr. Tulp (1632). Much like Rembrandt's version, The Gross Clinic documents sanitary medical procedures of its time, but the painting's real focus is living figures. Always a portraitist, Eakins calculated the work as a visual record of all the individuals present in the medical theater. Eakins inserted his own likeness among the audience - he's the figure at the far right, sketching. The core of the work is Dr. Gross, as light and composition conspire to attract the eye to the esteemed lecturer.

This work is one of Eakins' most important, well-known, and controversial paintings. It provides a clear example of his interest in scientific study and medicine. Eakins paid great attention to the technical details of the surgery, and the scene also shows great artistic skill and design in the way that the artist illuminates the otherwise dark scene with a wash of light coming down on the pale skin of the patient and the white sheets on which he rests. Dramatic effect and keen use of color are also demonstrated in the clear bursts of red used to show the blood on the victim's body and the assistants as well as the scalpel held by Dr. Gross.

Completed for the Centennial Exposition, The Gross Clinic was intended to be a statement of Eakins's artistic skill. Though the work was rejected by the selection committee, the artist's tactic was overall a success. While some critics lashed out against its gruesome subject matter, seemingly vulgar treatment, and inherent melodrama (note the near-swooning, hysterical woman in the left middle ground), viewers were nonetheless captivated by the work's theatricality. The painting was shown in the U.S. Army Post Hospital exhibition, not the main exhibition space - certainly a snub to the artist. Reactions were mixed with some praising Eakins for his study of anatomy, but most questioning the purpose of the painting and its morbidity. Now The Gross Clinic is recognized as one of the greatest American paintings ever made.

Many art historians consider The Gross Clinic to be one of the best American paintings ever made. Dr. Samuel D. Gross, a seventy-year-old professor dressed in a black frock coat, lectures a group of Jefferson Medical College students. Included among the group is a self-portrait of Eakins, who is seen at the right-hand side of the painting, next to the tunnel railing, with a white cuffed sleeve sketching or writing. Seen over Dr. Gross's right shoulder is the clinic clerk, Dr. Franklin West, taking notes on the operation.

Eakins's signature is painted into the painting, on the front of the surgical table.

Admired for its uncompromising realism, The Gross Clinic has an important place documenting the history of medicine—both because it honors the emergence of surgery as a healing profession (previously, surgery was associated primarily with amputation), and because it shows us what the surgical theater looked like in the nineteenth century.

The painting is based on a surgery witnessed by Eakins, in which Gross treated a young man for osteomyelitis of the femur. Gross is pictured here performing a conservative operation as opposed to an amputation (which is how the patient would normally have been treated in previous decades).

Here, surgeons crowd around the anesthetized patient in their frock coats. This is just prior to the adoption of a hygienic surgical environment (see asepsis). The Gross Clinic is thus often contrasted with Eakins's later painting The Agnew Clinic (1889), which depicts a cleaner, brighter, surgical theater, with the participants in "white coats". In comparing the two, the advancement in understanding of the prevention of infection is seen. Another noteworthy difference in the later painting is the presence of a professional nurse, Mary Clymer, in the operating theater.

It is assumed that the patient depicted in The Gross Clinic was a teenage boy, although the exposed body is not entirely discernible as male or female; the painting is shocking for both the odd presentation of this figure and the matter-of-fact goriness of the procedure.

Adding to the drama is the lone woman in the painting seen in the middle ground, possibly the patient's mother, cringing in distress. Her dramatic figure functions as a strong contrast to the calm, professional demeanor of the men who surround the patient. This bloody and very blunt depiction of surgery was shocking at the time it was first exhibited.

The painting was submitted for the 1876 Centennial Exhibition in Philadelphia, but was rejected by the Committee of Selection. When it was eventually displayed in Ward One of the U.S. Army Post Hospital, a critic for the New York Tribune wrote that it was:

These assessments were not universal. The critic for Philadelphia's The Evening Telegraph, who may have been aware of the personal politics involved in the advisory group of artists who rejected it, wrote: