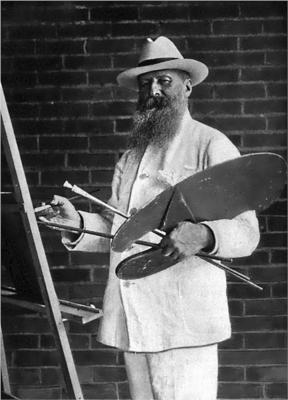 Vasily Vasilyevich Vereshchagin (Russian: Васи́лий Васи́льевич Вереща́гин, October 26, 1842 – April 13, 1904), was one of the most famous Russian war artists and one of the first Russian artists to be widely recognised abroad. The graphic nature of his realist scenes led to many of them never being printed or exhibited.

Vereshchagin was born at Cherepovets, Novgorod Governorate, Russia, in 1842 as the middle of three brothers. His father was a landowner of noble birth, while his mother had Tatar origins. When he was eight years old, he was sent to Tsarskoe Selo to enter the Alexander Cadet Corps. Three years later, he entered the Sea Cadet Corps at St Petersburg, making his first voyage in 1858. He served on the frigate Kamchatka, which sailed to Denmark, France and Egypt.

Vereshchagin graduated first in his list at the naval school, but left the service immediately to begin the study of drawing in earnest. Two years later, in 1863, he won a medal from the St Petersburg Academy for his Ulysses Slaying the Suitors. In 1864, he proceeded to Paris, where he studied under Jean-Léon Gérôme, though he dissented widely from his master's methods.

In the Paris Salon of 1866, he exhibited a drawing of Dukhobors chanting their Psalms. In the next year, he was invited to accompany General Konstantin Kaufman's expedition to Turkestan. He was granted the rank of ensign. His heroism at the siege of Samarkand from June 2–8, 1868 resulted an award of the Cross of St George, (4th class). He was an indefatigable traveller, returning to St Petersburg in late 1868, to Paris in 1869, back to St Petersburg later in the year, and then back to Turkestan via Siberia at the end of 1869.

In 1871, he established an atelier in Munich. He gave a solo exhibition of his works at the Crystal Palace in London in 1873. He gave another exhibition of his works in St Petersburg in 1874, where two of his paintings, namely, The Apotheosis of War, dedicated "to all conquerors, past, present and to come," and Left Behind, the picture of a dying soldier deserted by his fellows, were denied a showing on the grounds that they portrayed the Russian military in a poor light. In late 1874, he departed for an extensive tour of the Himalayas, India and Tibet, spending over two years in travel. He returned to Paris in late 1876.

With the start of the Russo-Turkish War (1877–1878), Vereshchagin left Paris and returned to active service with the Imperial Russian Army. He was present at the crossing of the Shipka Pass and at the Siege of Plevna, where his brother was killed. He was dangerously wounded during the preparations for the crossing of the Danube near Rustchuk. At the conclusion of the war, he acted as secretary to General Skobelev at San Stefano.

After the war, Vereshchagin settled in Munich, where he produced his war pictures so rapidly that he was freely accused of employing assistants. The sensational subjects of his pictures, and their didactic aim, namely, the promotion of peace by a representation of the horrors of war, attracted a large section of the public not usually interested in art to the series of exhibitions of his pictures in Paris in 1881 and subsequently in London, Berlin, Dresden, Vienna and other cities.