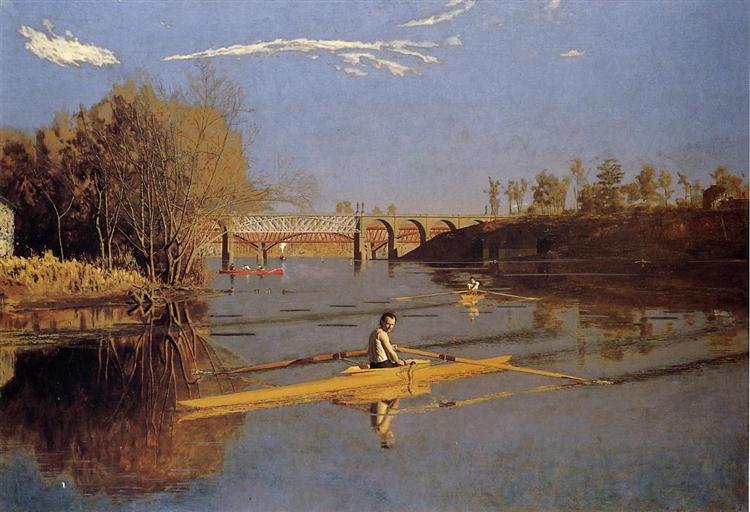 Returning to Philadelphia from Europe in 1870, Eakins began a series of representations of the sport of sculling, a subject for which he is uniquely identified. The Champion Single Sculls is the first significant work in that series of paintings and watercolors. It is believed to commemorate the victory of Max Schmitt, a friend of the artist and skilled amateur rower, in an important race on the Schuylkill River in October 1870. Also an avid rower, Eakins depicted himself pulling the oars of a scull in the middle distance.

The theme of rowing plays into Eakins’ own love of sports and his tendency toward masculine themes, as well as the contemporary interest in the moral virtues and health benefits of outdoor recreational activities. In an era in which American printmakers were just beginning to take up the rowing craze and memorialize victorious single scullers as gentlemen and regional heroes, Eakins produced nineteen such rowing images.
The Champion Single Sculls debuted to mixed reviews, with one critic noting the “scattered effect” of “dealing so boldly and broadly with the commonplace in nature.” Nevertheless, it marked Eakins’ first major success by demonstrating his remarkable technical skill. It also exhibits the artist’s quirky sense of humor: instead of inscribing his signature in the painting’s corner, Eakins subtly included his name and the date on the boat he is shown rowing in the distance.

The Champion Single Sculls is ultimately a snapshot of Eakins, his environment, and his times. Utilizing the Philadelphia-area Schuylkill River as his backdrop (a landmark he would indirectly visit again in his 1877 [url href=William Rush Carving His Allegorical Figure of the Schuykill River]portrait of William Rush[/url]), Eakins is domesticating an exotic genre, that of Orientalist river scenes by artists such as Jean-Léon Gérôme and Frederick Arthur Bridgman.

Max Schmitt in a Single Scull (also known as The Champion Single Sculls or The Champion, Single Sculls) is an 1871 painting by Thomas Eakins, Goodrich catalogue #44. It in the permanent collection of the Metropolitan Museum of Art. Set on the Schuylkill River in Philadelphia, Pennsylvania, it celebrates the victory of Eakins's friend Max Schmitt in the October 5, 1870, single sculls competition.

Max Schmitt (1843–1900) had attended Philadelphia Central High School with Eakins, and the two were close friends. Schmitt was a member of the Pennsylvania Barge Club – as, it is presumed, was Eakins – one of nine men's clubs in the Schuylkill Navy, and twelve that rowed on the river. The Schuylkill Navy had been organized in 1858, with approximately 300 members, and began hosting annual regattas in 1859 (with a four-year hiatus for the American Civil War). Initially, the races were for 6-oared and 4-oared gigs and barges, but a new kind of lightweight craft was rapidly gaining popularity: the racing scull.

Sculls, or shells, were narrower, longer, and a lot faster. Gigs had their oarlocks mounted on the sides (like a rowboat), but sculls had them a couple feet outside the boat thanks to riggers, triangular braces that projected out from the sides. This increased the efficiency of every stroke, and led to much longer oars. Meanwhile, boats got longer and hulls got narrower, until they were as narrow as was possible while still retaining sufficient buoyancy and balance.

Schmitt was an early convert to sculls, and owned his own, named "Josie" after his sister. The name of the scull is visible in the painting just below Schmitt's right hand. In September 1866, the Schuylkill Navy's annual regatta first featured a single-sculls race (3 miles, 1 turn), and Schmitt won it. He won again in July 1867, but in September came in second to another Pennsylvania Barge rower in a longer (4 miles, 1 turn) race. He did not participate in 1868, when fellow Pennsylvania Barge rowers won first and second. Schmitt won the single-sculls title again in June 1869, but in September came in second to an Undine Barge Club rower.

In 1870 the four top rowers in the Schuylkill Navy all belonged to the Pennsylvania Barge Club: Schmitt; Charles Brossman (who had won the title in 1868, and beaten Schmitt in the 4-mile race in September 1867); Austin Street (who had placed second in 1868); and John Lavens, Jr. They were the four competitors in the October championship race.

The course was 3 miles long: beginning near Turtle Rock (Turtle Rock Light is the lighthouse at the northwest end of Boathouse Row), proceeding upriver under the Girard Avenue and Pennsylvania Railroad Connecting Bridges to a stake near the Columbia Railroad Bridge, making a 180-degree turn around the stake, and then heading downriver back to the starting line.

Schmitt not only re-established himself as the pre-eminent rower on the Schuylkill River, he set a new record, completing the 3-mile, 1-turn course in 20:00 minutes.

Schmitt did not defend his title the following year, and Lavens won with a time of 19:59 minutes, shaving one second off Schmitt's record. Schmitt raced one-on-one against Lavens for the single-sculls championship in 1872, and won (but did not beat Lavens's record). Schmitt sat out 1873, and Lavens won again. The two raced one-on-one again in 1874, and Schmitt won again. Having regained the championship (but not the record) and never having been defeated by Lavens, Schmitt retired from single-sculls competition. But that same year, he and Lavens joined forces to help win the Four-Oared Shell competition for the Pennsylvania Barge Club. Another Eakins painting (unfinished) may commemorate that June 17, 1874 victory.