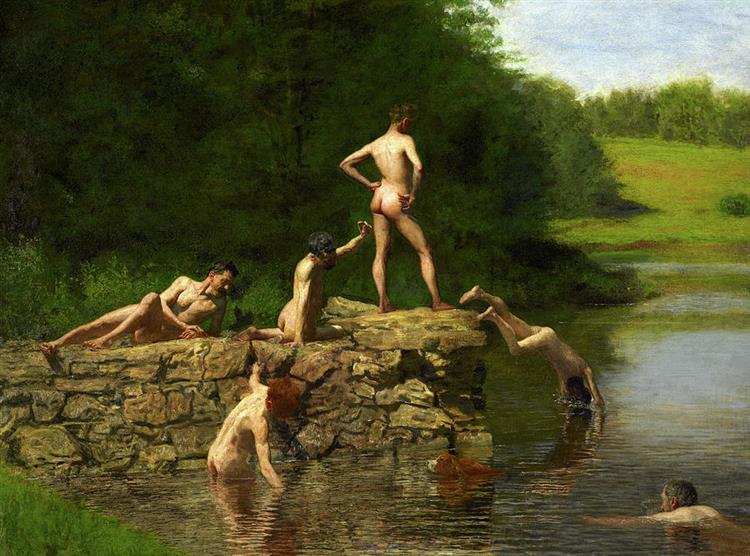 Eakins' most accomplished rendition of the nude figure, The Swimming Hole represents the artist and five other naked men, his students, and friends, at the edge of a creek near Philadelphia. It was commissioned by Edward H. Coates, a Philadelphia businessman who was then Chairman of the Committee on Instruction at the Pennsylvania Academy of the Fine Arts, where Eakins taught for a decade. The painting was shown in the Academy's 1885 annual exhibition but was soon returned to the artist by the patron, who exchanged it for a less controversial genre scene, The Pathetic Song (1881).

Within months, in 1886, Eakins was dismissed from the Academy, where his demands for the study of the nude offended Victorian propriety. The Swimming Hole, by its subject and provenance closely associated with this painful moment in Eakins' career, was exhibited only once more during his lifetime, in Louisville, Kentucky, in 1886. It remained in the painter's possession until his death thirty years later.

The painting's well-known title, The Swimming Hole, was first used in 1917, probably at Mrs. Eakins' suggestion. The artist called it Swimming and The Swimmers , emphasizing not the place, but the action and the figures. Eakins took numerous photographs of these young men swimming, and he presents them on the canvas as they appeared in real life without any romanticizing effects. The unsentimental and frank depiction of the male nude in various poses has sparked much debate. The voyeuristic element of the paintings compounded when one learns that Eakins painted himself into the scene as the figure swimming toward the rock. Whether an innocent depiction of male camaraderie and frivolity, an acknowledgment of latent gay desire, a celebration of the nude form focusing on muscle, bone, and anatomy, or a deliberate attempt to court controversy and propel one's reputation, the painting is still a subject of debate more than a century after the artist's death.

The Swimming Hole (also known as Swimming and The Old Swimming Hole) is an 1884–85 painting by the American artist Thomas Eakins (1844–1916), Goodrich catalog #190, in the collection of the Amon Carter Museum of American Art in Fort Worth, Texas. Executed in oil on canvas, it depicts six men swimming naked in a lake, and is considered a masterpiece of American painting. According to art historian Doreen Bolger it is "perhaps Eakins' most accomplished rendition of the nude figure", and has been called "the most finely designed of all his outdoor pictures". Since the Renaissance, the human body has been considered both the basis of artists' training and the most challenging subject to depict in art, and the nude was the centerpiece of Eakins' teaching program at the Pennsylvania Academy of the Fine Arts. For Eakins, this picture was an opportunity to display his mastery of the human form.

In this work, Eakins took advantage of an exception to the generally prudish Victorian attitude to nudity: swimming naked was widely accepted, and for males was seen as normal, even in public spaces. Eakins was the first American artist to portray one of the few occasions in 19th-century life when nudity was on display. The Swimming Hole develops themes raised in his earlier work, in particular his treatment of buttocks and his ambiguous treatment of the human form; in some cases it is uncertain as to whether the forms portrayed are male or female. Such themes had earlier been examined in his The Gross Clinic (1875) and William Rush (1877), and would continue to be explored in his paintings of boxers (Taking the Count, Salutat, and Between Rounds) and wrestlers (Wrestlers).

Although the theme of male bathers was familiar in Western art, having been explored by artists from Michelangelo to Daumier, Eakins' treatment was novel in American art at the time. The Swimming Hole has been "widely cited as a prime example of homoeroticism in American art". In 2008, the art critic Tom Lubbock described Eakins' work as:

Eakins referred to the painting as Swimming in 1885, and as The Swimmers in 1886. The title The Swimming Hole dates from 1917 (the year after Eakins died), when the work was so described by the artist's widow, Susan Macdowell Eakins Four years later, she titled the work The Old Swimming Hole, in reference to the 1882 poem The Old Swimmin'-Hole; by James Whitcomb Riley. The Amon Carter Museum has since returned to Eakins' original title, Swimming.

The painting shows Eakins and five friends or students bathing at Dove Lake, an artificial lake in Mill Creek outside Philadelphia. Each of the men is looking at the water, in the words of Martin A. Berger, "apparently lost in a contemplative moment". Eakins' precise rendering of the figures has enabled scholars to identify all those depicted in the work. They are (from left to right): Talcott Williams (1849–1928), Benjamin Fox (c. 1865 – c. 1900), J. Laurie Wallace (1864–1953), Jesse Godley (1862–1889), Harry the dog (Eakins' Irish Setter, c. 1880–90), George Reynolds (c. 1839–89), and Eakins himself. The rocky promontory on which several of the men rest is the foundation of the Mill Creek mill, which was razed in 1873. It is the only sign of civilization in the work—no shoes, clothes, or bath houses are visible. The foliage in the background provides a dark background against which the swimmers' skin tones contrast.