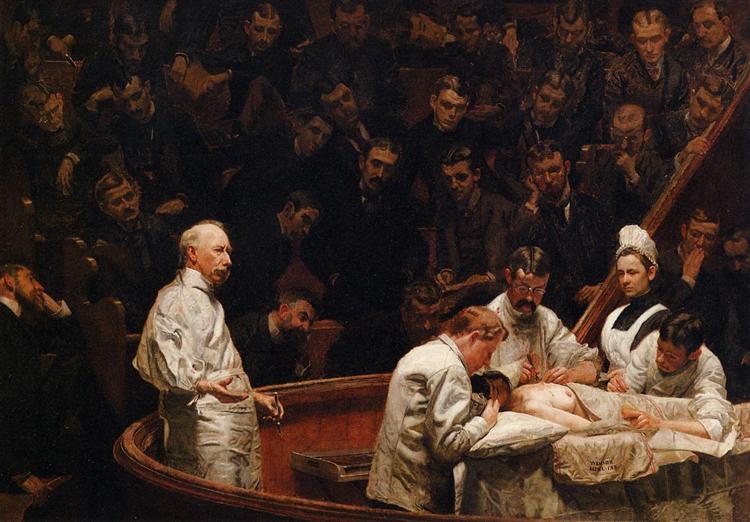 In this work, Eakins depicts Dr. Agnew, standing at the edge of the operating arena, overseeing a procedure in which three doctors perform a mastectomy on a female patient. Behind them, a female nurse stands at attention, presumably waiting to assist in the operation. Rows of seated male medical students watch the surgery. The white clothes of the doctors, the sheets covering a part of the patient's body, as well as her pale skin stand in sharp contrast to the dark tones in which the students are painted.

This painting marks the second time Eakins took as his subject a doctor teaching and performing surgery in a medical school setting. Once again, the stark and often gritty Realism for which he is best known is present in this work, but when compared with his earlier painting The Gross Clinic (1875), we can see a different, perhaps even more mature, approach to the subject matter. The work is notably awash in light that helps to draw the viewer to the action of the surgery. A heightened element of drama is created by choice of surgery depicted. While Dr. Agnew was a specialist in this type of operation, a mastectomy was, to the general public, a shocking and scary surgery of which little was still known. The fact that it had a high fatality rate imbues the scene with a more serious tone. Eakins placed himself in the crowd of students (on the far right of the canvas), but the inclusion of a female nurse, modeled on the first nurse graduate from the university's program, is unique to this work. Dr. Agnew, familiar with the earlier painting of Dr. Gross, insisted on not being painted with blood on his hands, as surgeons were too often associated with butchers.

The University of Pennsylvania's School of Medicine students commissioned the portrait as a gift for Dr. D. Hayes Agnew, who was retiring at the end of the term. They had wanted a simple portrait of the doctor, but Eakins created a more elaborate scene at no extra fee. The successful reception of the work when it was unveiled at the school's graduation, which included a standing ovation, buoyed the artist's spirits, and set the stage for a successful, albeit not scandal-free, later career. Despite the rejection of the work from a Society of American Artists show, a slight which led to Eakins severing all ties with the organization, it was well-received when first shown to a large public at the Chicago World's Columbian Exhibition in 1893.

The Agnew Clinic, or, The Clinic of Dr. Agnew, is an 1889 oil painting by American artist Thomas Eakins, Goodrich #235. It was commissioned to honor anatomist and surgeon David Hayes Agnew, on his retirement from teaching at the University of Pennsylvania.

The Agnew Clinic depicts Dr. Agnew performing a partial mastectomy in a medical amphitheater. He stands in the left foreground, holding a scalpel. Also present are Dr. J. William White, applying a bandage to the patient; Dr. Joseph Leidy (nephew of paleontologist Joseph Leidy), taking the patient's pulse; and Dr. Ellwood R. Kirby, administering anesthetic. In the background, the operating room nurse, Mary Clymer, and University of Pennsylvania medical school students observe. Eakins placed himself in the painting – he is the rightmost of the pair behind the nurse – although the actual painting of him is attributed to his wife, Susan Macdowell Eakins. The painting, also, records the significant transition, in just 14 years, from the earlier status quo — the participants' black frock coats represented in The Gross Clinic (1875) — to the "white coats" of 1889.

The painting is Eakins's largest work. It was commissioned for $750 (equivalent to $20,428 today) in 1889 by three undergraduate classes at the University of Pennsylvania, to honor Dr. Agnew on the occasion of his retirement. The painting was completed quickly, in three months, rather than the year that Eakins took for The Gross Clinic. Eakins carved a Latin inscription into the painting's frame. Translated, it says: "D. Hayes Agnew M.D. Most experienced surgeon, clearest writer and teacher, most venerated and beloved man."

The work is a prime example of Eakins's scientific realism. The rendering is almost photographically precise - so much so that art historians have been able to identify everyone depicted in the painting, with the exception of the patient. It largely repeats the subject of Eakins's earlier The Gross Clinic (1875), seen at the Philadelphia Museum of Art. The painting echoes the subject and treatment of Rembrandt's famous Anatomy Lesson of Dr. Nicolaes Tulp (1632) (in the Mauritshuis museum in The Hague, the Netherlands), and other earlier depictions of public surgery such as the frontispiece of Andreas Vesalius's De humani corporis fabrica (1543), the Quack Physicians' Hall (c. 1730) by the Dutch artist Egbert van Heemskerck, and the fourth scene in William Hogarth's The Four Stages of Cruelty (1751).

Students of the medical class of 1889 who commissioned The Agnew Clinic are portrayed as the audience for the surgery—as historian Amanda Mahoney points out, all individuals depicted in the work can be identified by name, except for the patient—and this audience of male medical students creates a composition that highlights power dynamics between the masculine and the feminine in the academic medical hierarchy. Central to the medical care of the patient yet separate in her femininity stands the woman in white—the nurse, Mary Clymer, who serves as the surgeon Agnew’s “structural counterpart” in the composition of the painting, the only other figure on the same level as the surgeon.