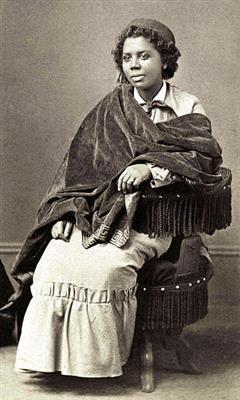 Mary Edmonia Lewis, "Wildfire" (c. July 4, 1844 – September 17, 1907), was an African American sculptor, of mixed African-American and Native American (Ojibwe) heritage. Born free in Upstate New York, she worked for most of her career in Rome, Italy. She was the first African-American sculptor to achieve national and then international prominence. She began to gain prominence in the United States during the Civil War; at the end of the 19th century, she remained the only Black woman artist who had participated in and been recognized to any extent by the American artistic mainstream. In 2002, the scholar Molefi Kete Asante named Edmonia Lewis on his list of 100 Greatest African Americans.


Her work is known for incorporating themes relating to Black people and indigenous peoples of the Americas into Neoclassical-style sculpture.


Edmonia repeatedly gave out misinformation about her early life. She was inconsistent even with basic facts about her origins, presenting herself, if she thought it would help her, as "an Indian girl", "born in a wigwam", "hunting, fishing, and making mocassins" the exotic product of a childhood spent roaming the forests with her mother’s people. On official documents she gave 1842, 1844, and even 1854 as her birth year. She played, or pretended to be, the "noble savage", and told "white lies" about her upbringing. However, she was born in the Albany, New York area, and most of her girlhood was apparently spent in Newark, New Jersey. By the time she got to college she was economically privileged, because her older brother had made a fortune in the California gold rush and "supplied her every want anticipating her wishes after the style and manner of a person of ample income".


Based on her own often inconsistent statements, as there is no relevant document, Edmonia Lewis was born about July 4, 1844; Americans who did not know their birthday often said it was July 4. She was born free in the former town of Greenbush, Rensselaer County, New York. Her mother, Catherine Mike Lewis, was mixed-race; of Mississauga Ojibwe and African-American descent. She was an excellent weaver and craftswoman. Two different African-American men are mentioned in different sources as being her father. The first is Samuel Lewis, who was Afro-Haitian and worked as a valet (gentleman's servant). Other sources say her father was the writer on African Americans, Robert Benjamin Lewis. Her half-brother Samuel, who is treated at some length in a history of Montana,
said that their father was "a West Indian Frenchman", and his mother "part African and partly a descendant of the educated Narragansett Indians of New York state." (Narragansett Indians are from Rhode Island and not known for education.)


By the time Lewis reached the age of nine, both of her parents had died; Samuel Lewis died in 1847 and Robert Benjamin Lewis in 1853. Her two maternal aunts adopted her and her older half-brother Samuel. Samuel was born in 1835 to his father of the same name, and his first wife, in Haiti. The family came to the United States when Samuel was a young child. Samuel became a barber at age 12 after their father died.