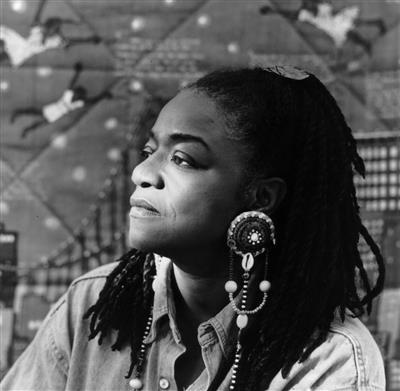 
Faith Ringgold was born the youngest of three children on October 8,1930, in Harlem Hospital, New York City. Her parents, Andrew Louis Jones and Willi Posey Jones, were descendants of working-class families displaced by the Great Migration. Ringgold's mother, a fashion designer, and her father, as well working a range of jobs was an avid storyteller, raised her in an environment that they encouraged her creativity. After the Harlem Renaissance, Ringgold's childhood home in Harlem became surrounded by a thriving arts scene – where figures such as Duke Ellington and Langston Hughes lived just around the corner. Her childhood friend, Sonny Rollins, who would grow up to be a prominent jazz musician, often visited her family and practiced saxophone at their parties. Because of her chronic asthma, Ringgold explored visual art as a major pastime through the support of her mother, often experimenting with crayons as a young girl. She also learned how to sew and work creatively with fabric from her mother. Ringgold maintains that despite her upbringing in Great Depression-era Harlem, 'this did not mean [she] was poor and oppressed' – she was 'protected from oppression and surrounded by a loving family. With all of these influences combined, Ringgold's future artwork was greatly affected by the people, poetry, and music she experienced in her childhood, as well as the racism, sexism, and segregation she dealt with in her everyday life.


In 1950, due to pressure from her family, Ringgold enrolled at the City College of New York to major in art, but was forced to major in art education instead, as City College only allowed women to be enrolled in certain majors. The same year, she also married a jazz pianist named Robert Earl Wallace and had two children, Michele and Barbara Faith Wallace. Ringgold and Wallace separated four years later due to his heroin addiction. In the meantime, she studied with artists Robert Gwathmey and Yasuo Kuniyoshi. She was also introduced to printmaker Robert Blackburn, with whom she would collaborate on a series of prints 30 years later.


In 1955, Ringgold received her bachelor's degree from City College and soon afterward taught in the New York City public school system. In 1959, She received her master's degree from City College and left with her mother and daughters on her first trip to Europe. While travelling abroad in Paris, Florence, and Rome, Ringgold visited many museums, including the Louvre. This museum in particular inspired her future series of quilt paintings known as the French Collection. This trip was abruptly cut short, however, due to the untimely death of her brother in 1961. Faith Ringgold, her mother, and her daughters all returned to the US for his funeral. She married Burdette Ringgold on May 19, 1962.


Ringgold visited West Africa twice: once in 1976 and again in 1977. These travels would deeply influence her mask making, doll painting and sculptures.