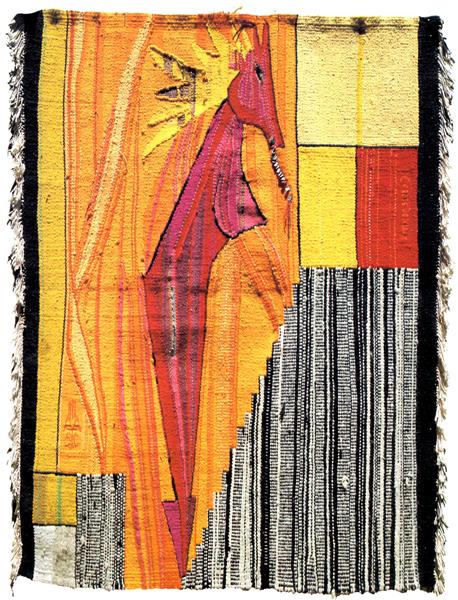 Fiber art refers to fine art whose material consists of natural or synthetic fiber and other components, such as fabric or yarn. It focuses on the materials and on the manual labour on the part of the artist as part of the works' significance, and prioritizes aesthetic value over utility.

The term fiber art came into use by curators and art historians to describe the work of the artist-craftsman following World War II. Those years saw a sharp increase in the design and production of "art fabric." In the 1950s, as the contributions of craft artists became more recognized—not just in fiber but in clay and other media—an increasing number of weavers began binding fibers into nonfunctional forms as works of art.

The 1960s and 70s brought an international revolution in fiber art. Beyond weaving, fiber structures were created through knotting, twining, plaiting, coiling, pleating, lashing, and interlacing. Artists in the United States and Europe explored the qualities of fabric to develop works that could be hung or free standing, "two or three dimensional, flat or volumetric, many stories high or miniature, nonobjective or figurative, and representational or fantasy." The women's movement of the same era was important in contributing to the rise of fiber art because of the traditional association of women with textiles in the domestic sphere; indeed, many of the most prominent fiber artists are women.

Since the 1980s, fiber work has become more and more conceptual, influenced by postmodernist ideas. For fiber artists, in addition to long-standing experimentation with materials and techniques, this brought "a new focus on creating work which confronted cultural issues such as: gender feminism; domesticity and the repetitive tasks related to women's work; politics; the social and behavioral sciences; material specific concepts related to fiber's softness, permeability, drapability, and so on."

Modern fiber art takes its context from the textile arts, which have been practiced globally for millennia. Traditionally, fiber is taken from plants or animals, for example cotton from cotton seed pods, linen from flax stems, wool from sheep hair, or silk from the spun cocoons of silkworms. In addition to these traditional materials, synthetic materials such as plastic acrylic are now used.

In order for the fiber to be made into cloth or clothing, it must be spun (or twisted) into a strand known as yarn. When the yarn is ready and dyed for use it can be made into cloth in a number of ways. Knitting and crochet are common methods of twisting and shaping the yarn into garments or fabric. The most common use of yarn to make cloth is weaving. In weaving, the yarn is wrapped on a frame called a loom and pulled taut vertically. This is known as the warp. Then another strand of yarn is worked back and forth wrapping over and under the warp. This wrapped yarn is called the weft. Most art and commercial textiles are made by this process.

For centuries weaving has been the way to produce clothes. In some cultures, weaving forms demonstrate social status. The more intricate the weaving, the higher the status. Certain symbols and colors also allowed identification of class and position. For example, in the ancient Incan civilization, black and white designs indicated a military status.