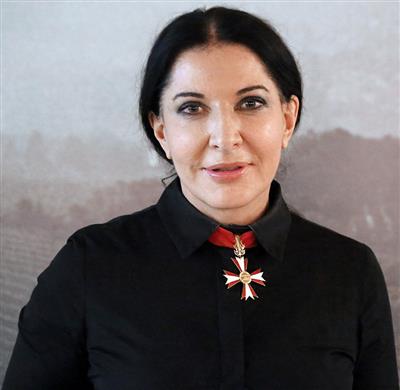 Marina Abramović (Serbian Cyrillic: Марина Абрамовић, pronounced [marǐːna abrǎːmoʋitɕ]; born November 30, 1946) is a Serbian performance artist. Her work explores the relationship between performer and audience, the limits of the body, and the possibilities of the mind. Being active for over four decades, Abramović refers to herself as the "grandmother of performance art." She pioneered a new notion of identity by bringing in the participation of observers, focusing on "confronting pain, blood, and physical limits of the body."


Abramović was born in Belgrade, Yugoslavia on November 30, 1946. In an interview, Abramović described her family as having been "Red bourgeoisie." Her great-uncle was Varnava, Serbian Patriarch of the Serbian Orthodox Church. Both of her parents, Danica Rosić and Vojin Abramović were Yugoslav Partisans during the Second World War. After the war, Abramović's parents became "national heroes" and were given positions in the post-war Yugoslavian government.


Abramović was raised by her grandparents until she was six years old. Her grandmother was deeply religious and Abramović "spent [her] childhood in a church following [her] grandmother's rituals – candles in the morning, the priest coming for different occasions." At age six, when Abramović's brother was born, she began living with her parents and took piano, French, and English lessons. While she did not take art lessons, she took an early interest in art and enjoyed painting as a child.


Life in Abramović's parental home under her mother’s strict supervision was difficult. When Abramović was a child, her mother beat her for "supposedly showing off". In an interview published in 1998, Abramović described how her "mother took complete military-style control of me and my brother. I was not allowed to leave the house after 10 o'clock at night until I was 29 years old. ... [A]ll the performances in Yugoslavia I did before 10 o'clock in the evening because I had to be home then. It's completely insane, but all of my cutting myself, whipping myself, burning myself, almost losing my life in 'The Firestar' - everything was done before 10 in the evening."


In an interview published in 2013, Abramović said, "My mother and father had a terrible marriage." Describing an incident when her father smashed 12 champagne glasses and left the house, she said, "It was the most horrible moment of my childhood."


After Abramović was married to Neša Paripović between 1971 to 1976, in 1976, she went to Amsterdam to perform a piece (later claiming on the day of her birthday) then decided to move there permanently.