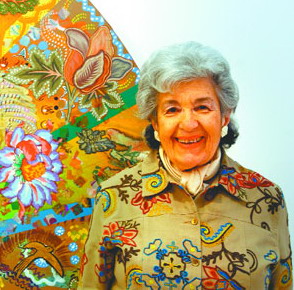 Miriam Schapiro (or Shapiro) (born 1923) is a Canadian-born artist based in America. She is a pioneer of feminist art. She is also considered part of the Pattern and Decoration art movement.

She was born in Toronto, Canada and studied at the State University of Iowa, where she met the artist Paul Brach, whom she married in 1946. By 1951 they moved to New York City and befriended many of the artists in the downtown Abstract expressionist New York School, including Joan Mitchell, Larry Rivers, Knox Martin and Michael Goldberg. Shapiro and Brach lived in New York City during the 1950s and 1960s. During this period Shapiro had a successful career as an abstract expressionist painter in the hard-edge style.

In the 1970s she moved to California, establishing the Feminist Art Program at the California Institute of the Arts with Judy Chicago. She participated in the Womanhouse exhibition in 1972.

Schapiro's work from the 1970s onwards consists primarily of collages assembled from fabrics, which she calls "femmages". Her 1977 - 1978 essay Waste Not Want Not: An Inquiry into What Women Saved and Assembled - FEMMAGE (written with Melissa Meyer) describes femmage as the activities of collage, assemblage, découpage and photomontage practised by women using "traditional women's techniques - sewing, piercing, hooking, cutting, appliquéing, cooking and the like..."

Her works are held in numerous museum collections including the Jewish Museum (New York) and the National Gallery of Art.

Her awards include the distinguished artist award for lifetime achievement from the College Art Association.

Miriam Schapiro (also known as Mimi) (November 15, 1923 – June 20, 2015) was a Canadian-born artist based in the United States. She was a painter, sculptor, printmaker, and a pioneer of feminist art. She was also considered a leader of the Pattern and Decoration art movement. Schapiro's artwork blurs the line between fine art and craft. She incorporated craft elements into her paintings due to their association with women and femininity. Schapiro’s work touches on the issue of feminism and art: especially in the aspect of feminism in relation to abstract art. Schapiro honed in her domesticated craft work and was able to create work that stood amongst the rest of the high art. These works represent Schapiro’s identity as an artist working in the center of contemporary abstraction and simultaneously as a feminist being challenged to represent women’s “consciousness” through imagery. She often used icons that are associated with women, such as hearts, floral decorations, geometric patterns, and the color pink. In the 1970s she made the hand fan, a typically small woman's object, heroic by painting it six feet by twelve feet. "The fan-shaped canvas, a powerful icon, gave Schapiro the opportunity to experiment... Out of this emerged a surface of textured coloristic complexity and opulence that formed the basis of her new personal style. The kimonos, fans, houses, and hearts were the form into which she repeatedly poured her feelings and desires, her anxieties, and hopes".

Schapiro was born in Toronto, Ontario, Canada. She was the only child of two Russian Jewish parents. Her Russian immigrant grandfather invented the first movable doll’s eye in the United States and manufactured "Teddy Bears." Her father, Theodore Schapiro, was an artist and an intellectual who was studying at the Beaux-Arts Institute of Design, in New York, when Schapiro was born. He was an industrial design artist who fostered her desire to be an artist and served as her role model and mentor. Her mother, Fannie Cohen,a homemaker and a Zionist, encouraged Schapiro to take up a career in the arts. At age six, Schapiro began drawing.

As a teenager, Schapiro attended was taught by Victor d’ Amico, her first modernist teacher at the Museum of Modern Art. In the evenings she joined WPA classes for adults to study drawing from the nude model. In 1943, Schapiro entered Hunter College in New York City, but eventually transferred to the University of Iowa. At the University of Iowa, Schapiro studied painting with Stuart Edie and James Lechay. She exhibited paintings and prints, which then led her to help form the Iowa Print Group.

At the State University of Iowa she met the artist Paul Brach, whom she married in 1946. By 1951 they moved to New York City and befriended many of the Abstract expressionist artists of the New York School, including Joan Mitchell, Larry Rivers, Knox Martin and Michael Goldberg. Schapiro and Brach lived in New York City during the 1950s and 1960s. Miriam and Paul had a son, Peter Brach, in 1955. Before and after the birth of her son Peter, Schapiro struggled with her identity and place as an artist. Miriam’s Schapiro’s successive studios, after this period of crisis, became both environments for and reflections of the changes in her life and art. During this period Schapiro had a successful career as an abstract expressionist painter in the hard-edge style. She died on June 20, 2015 in Hampton Bays, New York, aged 91.