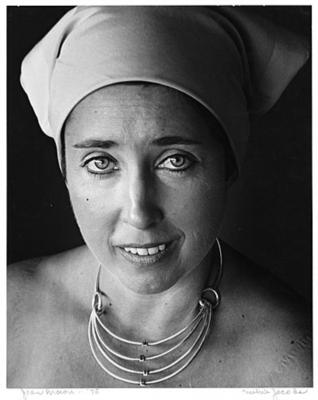 Joan Brown (February 13, 1938 – October 26, 1990) was an American figurative painter who lived and worked in Northern California. She was a member of the "second generation" of the Bay Area Figurative Movement.

In the late 1950s, Joan Brown was a maturing artist who helped make California, and the Bay Area in particular, an important artistic center. Brown worked with multiple other artists to make popular the concepts of figurative painting, beat culture, and funk art.

Joan Brown was born on February 19, 1938, in San Francisco to a second-generation Irish father and a native Californian mother. Brown’s family life was very unhappy. Her father drank heavily and her mother, who had intended to have a career instead of a family, frequently threatened suicide. Brown could not wait to grow up and move out.

Growing up, Brown acquired her education through Catholic Schools in San Francisco—first St. Vincent de Paul School and then Presentation High School—which engendered in her a revulsion toward Catholic education and religion. She studied at the California School of Fine Art (now San Francisco Art Institute), graduating with a Bachelor of Fine Arts degree in 1959 and a Master of Arts in 1960. There she met her instructor and mentor Elmer Bischoff. While still a student she had her first solo gallery exhibition in 1958.

In 1956 she married her first husband, Bill Brown, a fellow student who had encouraged her to complete her course and work with Bischoff. However, right before their wedding, she became very ill. Bill Brown presented her with books that contained reproductions of paintings by Rembrandt, Francisco Goya, Diego Velázquez, and other masters. Due to her illness, Brown had time to study the books carefully. She later stated, "I'd never seen any of this stuff, and I felt this tremendous surge of energy". She was inspired to want to follow their example, and she realized that painting professionally was what she was meant to do.

The marriage of Joan and Bill Brown was annulled in 1962. She was married to Bay Area Figurative sculptor Manuel Neri from 1962 to 1966, though their relationship and artistic collaboration dated back several years prior to this.

Brown achieved prominence with a style of figurative painting that combined bright color, sometimes cartoonish drawing, and personal symbolism. Her first museum show occurred at the Whitney annual show in New York (now the Whitney Biennial) in 1960 when she was 22. She was the youngest artist to be exhibited that year.

As a teenager, Brown would flip through magazines and make pencil sketches of any celebrities she found to be sophisticatedly dressed. In 1956, Brown took a summer class at CSFA with Elmer Bischoff. Bischoff was the teacher that influenced Brown the most through his motivation, encouragement, and overall mentorship. He told her to follow her heart and to not focus on small details and academic rules. She noted that his instructional methods allowed her to make mistakes and learn from them. Bischoff led Brown to think more about the actual art and the struggles that come along with producing her paintings. This inspired Brown to become more serious and focused on exploring and discovering her talents and techniques.