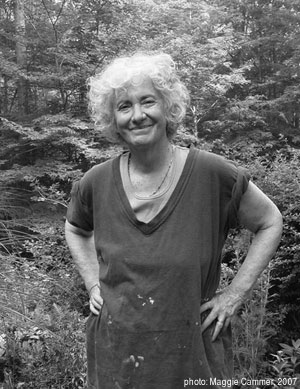 Joan Snyder, (born April 16, 1940), is an American painter from New York. She is a MacArthur Fellow, a Guggenheim Fellow, and a National Endowment for the Arts Fellow.

Snyder first gained public attention in the early 1970s with her gestural and elegant “stroke paintings,” which used the grid to deconstruct and retell the story of abstract painting. By the late seventies, Snyder had abandoned the formality of the grid. She began more explicitly incorporating symbols and text, as the paintings took on a more complex materiality. These early works were included in the 1973 and 1981 Whitney Biennials and the 1975 Corcoran Biennial.

"The functions of Ms. Snyder's art, first and foremost, are to further the tradition of painting and to explore the most serious aspects of the human condition; to connect us not only to one another and to nature but to ancient rites and myths. She reminds us that no matter how modern and civilized we are, art can still be raw, primitive and talismanic. Without apologies or decorum, Ms. Snyder's work awakens all of the things still wild within us." – Lance Esplund, WSJ

Often referred to as an autobiographical or confessional artist, Snyder’s paintings are narratives of both personal and communal experiences. Through a fiercely individual approach and persistent experimentation with technique and materials, Snyder has extended the expressive potential of abstract painting, inspiring generations of emerging artists.

Joan Snyder was born on April 16, 1940 in Highland Park, New Jersey. She received her AB from Douglass College in 1962 and her MFA from Rutgers University in 1966.

In 1969 Snyder married photographer Larry Fink. She gave birth to their daughter, Molly, in 1979. Her grandson Elijah was born in 2012. In 2011 Snyder married her partner of 28 year, Margaret Cammer, a retired New York State Acting Supreme Court Judge and the former NY Deputy Administrative Judge of The New York City Civil Court.

After graduating from Douglass College in 1962 with a BA in Sociology, Snyder received her MFA from Rutgers University in 1966.

While living on a New Jersey farm in 1962, Snyder worked in a studio on the Raritan River in New Brunswick, creating some of her earliest paintings of farm and landscape scenes, as well as expressionist portraits. In the mid to late 60’s she was working explicitly with the idea of female sensibility, using materials in her paintings such as lentil seeds, flocking, thread, glitter and gauze. Snyder describes her processes involving non-art materials as a type of ritual act for the painting. Snyder’s ideas often take form in her paintings through other means other than paint such as music, poetry and words to further push the intent of her pieces. These works eventually led to Snyder’s seminal stroke paintings in the late 60’s and early ‘70’s.Critics have classified her work as inaccessible to viewers because of her messy, crowded style of painting. Snyder working alongside artists such as Mary Heilmann, Jennifer Bartlett and Harriet Korman during the 1960s, all of whom were attempting to bring more process into their art making.