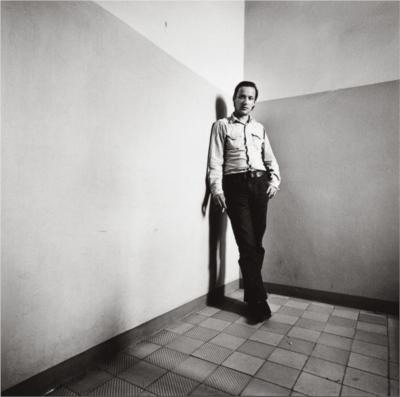 Palermo was born Peter Schwarze in Leipzig, Germany, in 1943, and adopted as an infant, with his twin brother, Michael, by foster parents named Heisterkamp, became Peter Heisterkamp, and moved to Münster in 1952. He was given his outlandish name in 1964, during his studies with Bruno Goller and Joseph Beuys at the Kunstakademie Düsseldorf between 1962 and 1967. The name refers to Frank "Blinky" Palermo, an American Mafioso and boxing promoter who was famous at the time for "owning" Sonny Liston. According to legend, it was given to Schwarze at the suggestion of Beuys when the teacher noticed the physical resemblance between Schwarze and the gangster.

In 1969, Palermo moved to Mönchengladbach and set up a studio he would share with Imi Knoebel and Ulrich Rückriem. After a stay in New York in the early 1970s, he moved into Gerhard Richter's former Düsseldorf studio.

Blinky Palermo died in Malé, aged 33, while on vacation on Kurumba island, Maldives in 1977 (of causes that often are referred to as "mysterious" but widely acknowledged as related to Palermo's drug use). His brother Michael Heisterkamp is the sole heir and owner of the copyright of Palermo.

Palermo was best known for his spare monochromatic canvases and "fabric paintings" made from simple lengths of colored material cut, stitched and stretched over a frame. He painted on aluminum, steel, wood, paper and Formica, often making lines out of tape instead of paint. Later in his career, Palermo would develop his work in situ for large-scale architectural installations. From 1968 he realized more than twenty murals and wall drawings at various sites in Europe, including Edinburgh and Brussels, and recorded them in preparatory sketches and photographic documentation. Palermo's first solo show was held in 1966 at Galerie Friedrich+Dahlem in Munich. Before his death, he further participated in more than seventy exhibitions, most notably at documenta in 1972 and 1977. Along with Georg Baselitz and Sigmar Polke, he represented Germany at the 13th Bienal de São Paulo in 1975. In 1976, his work Himmelsrichtungen was shown at the Venice Biennale.

Public collections holding major works by Palermo include the Museum of Modern Art, New York, Tate Gallery, London, and Dia Art Foundation, New York. Most of the artist's work, however, remains in the possession of private collectors and museums in Europe.

Palermo's auction record is held by Untitled (Stoffbild) (1967-69), a large square panel of cotton fabric on burlap, painted with two bands of solid color of uneven height, respectively dark blue and turquoise. Auctioned from the collection of Gerhard and Anna Lenz at Sotheby's London in 2010, it fetched £1.11 million.