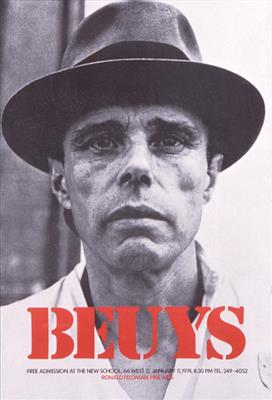 Joseph Beuys was a German sculptor, painter, installation artist, art theorist and art pedagogue, and is considered one of the most influential European performance artists. In his early school years, he was considered to have a natural talent for drawing, and he visited the sculpting studio of Achilles Moortgat many times. His later childhood was spent in the era of the Nazi Third Reich. When he was 15 years old, he was a member of the Hitler Youth, and participated in the Nuremburg rally. In 1941, he volunteered for the German Luftwaffe, first acting as an aircraft radio operator, and later part of various bombing missions in the Crimea. In 1944, Beuy’s plane was shot down on the Crimean Front. Beuys was the only person to survive the crash, and later claimed to have been rescued by Tartar tribesmen, who covered him with animal fat and felt to keep him warm and nursed him back to health. Eyewitness accounts, however, claim that although Beuys was the only one to survive the crash, there were no Tartar tribesmen. He was instead rescued by a German search commando, and taken to a military hospital where he stayed for three weeks. He was redeployed later the same year, and held as a prisoner of war after the German surrender in 1945.

Upon his return to civilian life, Beuys became an active member in the art community, and an outspoken proponent of anthroposophy, which posited that one could experience the spiritual world through inner development. He graduated from art school in 1953, to a dire financial situation, which was compounded by the traumas he experienced in war. By 1956, he was facing a serious depression, due to his materially and psychologically impoverished situation, from which he recovered and married his wife Eva Wurmbach in 1959.

Beuy’s financial situation improved in 1961 when he was appointed professor of sculpture at the Dusseldorf Academy. It was during his tenure at the academy that he released his essay Lebenslauf/Werklauf, which was a somewhat fictionalized account of the artist’s life, and created much controversy, due to its blurring of fact and fiction. It was at this point that Beuy’s work became more polarizing, and his renegade philosophical and political beliefs led to his dismissal from his professorial position in 1972.

Much of Beuys most popular works were his performance and installation pieces, including “How to Explain Pictures to a Dead Hare” in 1965, “I Like America and America Likes Me” in 1974, and a social sculpture project that involved planting 7,000 trees in Germany. His legacy now includes dozens of exhibition all across the world, continued participation in his oak tree social sculpture, which has expanded to New York City, and growing sales of his work at auction.

His extensive work is grounded in concepts of humanism, social philosophy and anthroposophy; it culminates in his "extended definition of art" and the idea of social sculpture as a gesamtkunstwerk, for which he claimed a creative, participatory role in shaping society and politics. His career was characterized by open public debates on a very wide range of subjects including political, environmental, social and long term cultural trends. He is widely regarded as one of the most influential artists of the second half of the 20th century.

Joseph Beuys was born in Krefeld, the son of the merchant Josef Jakob Beuys (1888–1958) and Johanna Maria Margarete Beuys (born Hülsermann, 1889–1974). The parents had moved from Geldern to Krefeld in 1910, and Beuys was born there on 12 May 1921. In autumn of that year the family moved to Kleve, an industrial town in the Lower Rhine region of Germany, close to the Dutch border. There, Joseph attended primary school (Katholische Volksschule) and secondary school (Staatliches Gymnasium Cleve, now the Freiherr-vom-Stein-Gymnasium). His teachers considered him to have a talent for drawing; he also took piano and cello lessons. On several occasions he visited the studio of the Flemish painter and sculptor Achilles Moortgat. Other interests include Nordic history and mythology and especially the natural sciences. According to his own account, when the Nazi Party staged their book-burning in Kleve on 19 May 1933 in the courtyard of his school, he salvaged the book Systema Naturae by Carl Linnaeus "...from that large, flaming pile".

In 1936 Beuys was a member of the Hitler Youth; the organization comprised a large majority of German children and adolescents at that time and later that year membership became compulsory. He participated in the Nuremberg rally in September 1936, when he was 15 years old.

From an early age, Beuys displayed an interest in the natural sciences and had considered a career in medical studies, but in his last years of school–possibly influenced by pictures of Wilhelm Lehmbruck's sculptures–he had decided to become a sculptor himself. Around 1939 he worked for a circus on the side, postering and taking care of animals for about a year. He graduated from school in the spring of 1941 with his Abitur.

In 1941, Beuys volunteered for the Luftwaffe. He began his military training as an aircraft radio operator in 1941, under the tutelage of Heinz Sielmann in Posen (now Poznań) and they both attended lectures in Biology and Zoology at the University of Posen, at that time a Germanized University. It is also during this time that he began to seriously consider a career as an artist.

In 1942, Beuys was stationed in the Crimea and was a member of various combat bomber units. From 1943 on he was deployed as rear-gunner in the Ju 87 "Stuka" dive-bomber, initially stationed in Königgrätz, later in the eastern Adriatic region. Drawings and sketches from that time have been preserved and already show his characteristic style. On 16 March 1944, Beuys's plane crashed on the Crimean Front close to Znamianka, (then "Freiberg"). From this incident, Beuys fashioned the myth that he was rescued from the crash by nomadic Tatar tribesmen, who had wrapped his broken body in animal fat and felt and nursed him back to health: