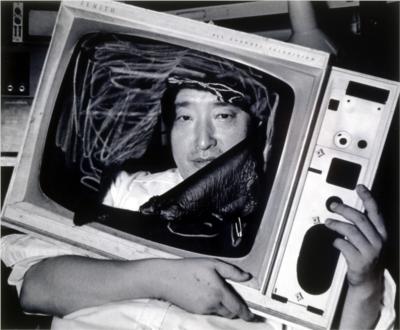 Nam June Paik (Korean: 백남준, July 20, 1932 – January 29, 2006) was a Korean American artist. He worked with a variety of media and is considered to be the founder of video art. He is credited with an early usage (1974) of the term "electronic super highway" in application to telecommunications.

Born in Seoul in 1932, the youngest of five siblings, Paik had two older brothers and two older sisters. His father (who in 2002 was revealed to be a Chinilpa) owned a major textile manufacturing firm. As he was growing up, he was trained as a classical pianist. In 1950, Paik and his family had to flee from their home in Korea, during the Korean War. His family first fled to Hong Kong, but later moved to Japan. Six years later, he graduated from the University of Tokyo where he wrote a thesis on the composer Arnold Schoenberg.

Paik then moved to West Germany to study music history with composer Thrasybulos Georgiades at Munich University. While studying in Germany, Paik met the composers Karlheinz Stockhausen and John Cage and the conceptual artists George Maciunas, Joseph Beuys and Wolf Vostell and was from 1962 on, a member of Fluxus.

Nam June Paik then began participating in the Neo-Dada art movement, known as Fluxus, which was inspired by the composer John Cage and his use of everyday sounds and noises in his music. He made his big debut in 1963 at an exhibition known as Exposition of Music-Electronic Television at the Galerie Parnass in Wuppertal in which he scattered televisions everywhere and used magnets to alter or distort their images. In a 1960 piano performance in Cologne, he played Chopin, threw himself on the piano and rushed into the audience, attacking Cage and pianist David Tudor by cutting their clothes with scissors and dumping shampoo on their heads.

Cage suggested Paik look into Oriental music and Oriental religion. During 1963 and 1964 the engineers Hideo Uchida and Shuya Abe showed Paik how to interfere with the flow of electrons in color TV sets, work that led to the Abe-Paik video synthesizer, a key element in his future TV work.

In 1964, Paik moved to New York, and began working with classical cellist Charlotte Moorman, to combine his video, music, and performance. In the work TV Cello, the pair stacked televisions on top of one another, so that they formed the shape of an actual cello. When Moorman drew her bow across the "cello," images of her and other cellists playing appeared on the screens.

In 1965, Sony introduced the Portapak. With this, Paik could both move and record things, for it was the first portable video and audio recorder. From there, Paik became an international celebrity, known for his creative and entertaining works.

In a notorious 1967 incident, Moorman was arrested for going topless while performing in Paik’s Opera Sextronique. Two years later, in 1969, they performed TV Bra for Living Sculpture, in which Moorman wore a bra with small TV screens over her breasts. Throughout this period it was his goal to bring music up to speed with art and literature, and make sex an acceptable theme. One of his Fluxus concept works ("Playable Pieces") instructs the performer to "climb inside the vagina of a live female whale." Of the "Playable Pieces," the only one actually to have been performed was by Fluxus composer Joseph Byrd ("Cut your left forearm a distance of ten centimeters.") in 1964 at UCLA's New Music Workshop.