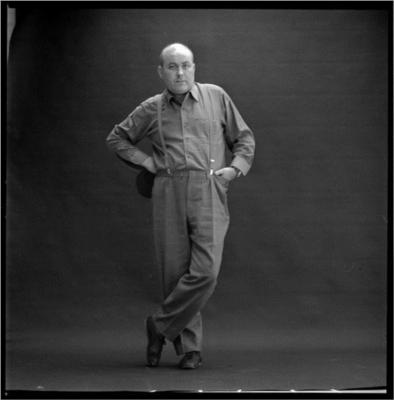 Dieter Roth (April 21, 1930 – June 5, 1998) was a Swiss artist best known for his artist's books, editioned prints, sculptures, and works made of found materials, including rotting food stuffs. He was also known as Dieter Rot and Diter Rot.

He was born Karl-Dietrich Roth in Hannover, the first of three sons. His mother Vera was German; his father Karl-Ulrich was a Swiss businessman. After the beginning of World War II, Roth was to spend each summer in Switzerland at the behest of the Swiss charity Pro Juventute, a group trying to protect Swiss-German children from the worst ravages of the war. By 1943 the exile had become permanent, and Roth was sent to live with a family in Zürich. This house, the home of the family of Fritz Wyss, was shared with Jewish and communist artists and actors. It was here that Roth would be encouraged to start painting and to write poetry. He wasn't to be re-united with his family, by now utterly destitute, until 1946.

The family moved to Bern in 1947, where Roth began an apprenticeship in commercial art. His clientele include the local milk association and the cheese union. After seeing an exhibition of Paul Klee's work, "a shock that [was to] grow into an obsession", he gradually moved from the style of commercial art he was being instructed in, towards international modernism.

Roth left home in 1953, and began to collaborate with Marcel Wyss and Eugen Gomringer on the magazine Spirale, of which nine issues would be published (1953–64). Most of his work at this time was in the prevailing Concrete art idiom, exemplified by Max Bill. He took part in a number of local exhibitions, as well as writing poetry, making his first organic sculptures and experimenting with Op art. In 1954 he met the artist Daniel Spoerri whose friendship was to be recalled as "one of the most wonderful things I ever experienced." Spoerri would later set up Editions MAT, a publishing house for editioned books and sculptures, which would print some of Roth's early works.

In 1957 Roth married an Icelandic student Sigríður Björnsdóttir, and moved with her back to Reykjavik. Cut off from centres of European modernism, Roth started publishing a series of highly influential artist's books, and to publish these books he founded, with Icelandic poet Einar Bragi, the publishing company forlag ed. In works such as Bok ("Book") 1958, cut holes in the pages and dispensed with the codex, allowing the reader to rearrange the pages in any order they wished, whilst Daily Mirror Book, 1961, used the found material of a newspaper cut into 2 cm squares and then rebound as a 150-page book.

This processing of found text reached a logical conclusion in his book Literaturwurst (Literature Sausage) 1961. The first copy was made out of a Daily Mirror mixed with spices and foodstuffs from genuine sausage recipes, and stuffed in a sausage skin which he sent to his friend Spoerri. Later copies took books or magazines to create an "ironic" reference to literature. This marked the beginnings of his use of foodstuffs in art, which brought him increasing notoriety throughout the 1960s.