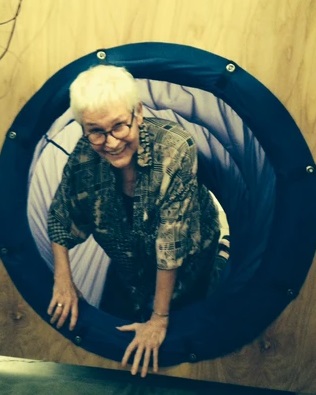 Alison Knowles (born 1933) is an American visual artist known for her installations, performances, soundworks, and publications. Knowles was a founding member of the Fluxus movement, the experimental avant-garde group formally founded in 1962. Criteria that have come to distinguish her work as an artist are the arena of performance, the indeterminacy of her event scores resulting in the deauthorization of the work, and the element of tactile participation. She graduated from Pratt Institute in New York with an honors degree in fine art. In May 2015, she was awarded an honorary doctorate degree by Pratt.

In the 1960s, she was an active participant in New York City's downtown art scene, collaborating with influential artists such as John Cage and Marcel Duchamp. During this time she began producing event scores, or performances that rework the everyday into art. Knowles's inclusion of visual, aural, and tactile elements in her performances sets her art apart from the work of other Fluxus artists.

Alison Knowles was married to Dick Higgins, a leading Fluxist who coined the term intermedia. She has two twin daughters, Jessica and Hannah Higgins. Jessica is a New York-based intermedia artist closely associated with seminal curator Lance Fung, late Fluxus gallerist Emily Harvey, and The International Artists' Museum's Construction in Process. Hannah Higgins is a writer, art historian, and professor at the University of Illinois at Chicago. Both daughters performed and collaborated in original Fluxus related events as youths. Knowles often does performance pieces with members of her family, including Loose Pages, Shoes Of Your Choice, and Beans All Day. Knowles lives and works from her loft in New York City's Soho district, where she was a homesteader beginning in the 1950s.

Transferring from Middlebury College in Vermont, Knowles graduated from the Pratt Institute in 1956. Since her father was a professor at Pratt, she was able to enroll in the school at no cost. During night classes, Knowles studied painting with abstract expressionist Adolph Gottlieb. She admired Helen Frankenthal and had acquaintance with the work of Jackson Pollock. Franz Kline also taught some of the painting courses. During the day, Knowles studied graphic design and commercial layout. A class taught by painter Richard Lindner proved very influential for Knowles. “What I learned there was that I am an artist. What I should have learned there is that I am not a painter,” said Knowles in a 2006 interview.

In addition to her father, Knowles notes John Cage as another one of her mentors. She knew of Cage through one of his courses taught at the New School for Social Research in the late 1950s. Many of the Fluxus leaders, such as Dick Higgins, George Brecht, Al Hansen, and Allan Kaprow, took the class with John Cage. Knowles’s focus in painting diminished after her show at the Nonegon Gallery in New York, in which she destroyed all of her works in a bonfire behind her brother’s house. This act of destruction led directly to her association with other types of work and eventually with Fluxus. On the first Fluxus tour in 1962, Knowles began to write event scores, which would quickly become a major aspect of the movement.