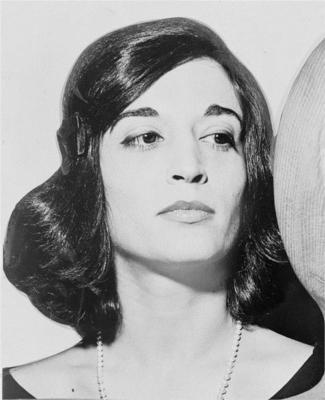 Marisol Escobar (May 22, 1930 – April 30, 2016), otherwise known simply as Marisol, was a French sculptor of Venezuelan heritage who worked in New York City.

Maria Sol Escobar was born on May 22, 1930, to Venezuelan parents in Paris, France. She was preceded by an elder brother, Gustavo. Her father, Gustavo Hernandez Escobar, and her mother, Josefina, were from wealthy families and lived off assets from oil and real estate investments. This wealth led them to travel frequently from Europe, the United States, and Venezuela. At some point in time, Maria Sol began going by Marisol, a common Spanish nickname.

Josefina Escobar committed suicide in 1941, when Marisol was eleven. The tragedy, followed by her father shipping Marisol off to boarding school in Long Island, New York, for one year, affected her very deeply. Marisol decided to not speak again after her mother's passing, although she made exceptions for answering questions in school or other requirements; she did not regularly speak out loud until her early twenties.

Although Marisol was deeply traumatized, this did not affect her artistic talents. She had begun drawing early in life, with her parents encouraging her talent by taking her to museums. Her talents in drawing frequently earned her artistic prizes at the various schools she attended before settling in Los Angeles in 1946. Marisol additionally displayed talent in embroidery, spending at least three years embroidering the corner of a tablecloth (including going to school on Sundays in order to work).

Marisol was very religious. During her teen years, she coped with the trauma of her mother's death, by walking on her knees until they bled, keeping silent for long periods, and tying ropes tightly around her waist.

After Josefina's death and Marisol's exit from the Long Island boarding school, the family traveled between New York and Caracas, Venezuela. In 1946, when Marisol was 16, the family relocated permanently to Los Angeles; she was enrolled at the Marymount School for Girls. She disliked this institution, and transferred to the Westlake School for Girls in 1948.

Marisol Escobar began her formal arts education in 1946 with night classes at the Otis Art Institute and the Jepson Art Institute in Los Angeles, where she studied under Howard Warshaw and Rico Lebrun.

Marisol studied art at the Paris École des Beaux-Arts in 1949. She then returned to begin studies at the Art Students League of New York, at the New School for Social Research, and she was a student of artist Hans Hofmann.

The pop art culture in the 1960s embraced Marisol as one of its members, enhancing her recognition and popularity. She concentrated her work on three-dimensional portraits, using inspiration “found in photographs or gleaned from personal memories”.

During the Postwar period, there was a return of traditional values that reinstated social roles, conforming race and gender within the public sphere. Marisol`s sculptural works toyed with the prescribed social roles and restraints faced by women during this period through her depiction of the complexities of femininity as a perceived truth. Marisol’s practice demonstrated a dynamic combination of folk art, dada, and surrealism – ultimately illustrating a keen psychological insight on contemporary life. By displaying the essential aspects of femininity within an assemblage of makeshift construction, Marisol was able to comment on the social construct of ‘woman’ as an unstable entity. Using an assemblage of plaster casts, wooden blocks, woodcarving, drawings, photography, paint, and pieces of contemporary clothing, Marisol effectively recognized their physical discontinuities. Through a crude combination of materials, Marisol symbolized the artist’s denial of any consistent existence of ‘essential’ femininity. ‘Femininity’ being defined as a fabricated identity made through representational parts. An identity which was most commonly determined by the male onlooker, as either mother, seductress, or partner. Using a feminist technique, Marisol disrupted the patriarchal values of society through forms of mimicry. She imitated and exaggerated the behaviors of the popular public. Through a parody of women, fashion, and television, she attempted to ignite social change.