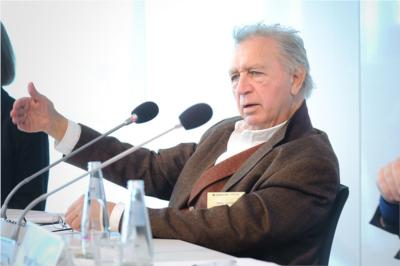 Jimmie Durham (born 1940) is an American-born sculptor, essayist and poet, living and working in Europe since 1994. He was active in the United States in the civil rights movements of African Americans and Native Americans in the 1960s and 1970s, serving on the central council of the American Indian Movement (AIM). He returned to working at art while living in New York City. His work has been extensively exhibited.

He has long claimed to be Cherokee but that claim has been denied by tribal representatives: "Durham is neither enrolled nor eligible for citizenship in any of the three federally-recognized and historical Cherokee Tribes: the Eastern Band of Cherokee Indians, the United Keetoowah Band of Cherokee Indians of Oklahoma, and the Cherokee Nation." He has "no known ties to any Cherokee community".

Jimmie Durham was born on July, 10, 1940, in Houston,, Harris County, Texas, although he claimed he was born in Nevada County, Arkansas, and Washington, Hempstead County, Arkansas. His parents are Jerry Loren Durham and Ethel Pauline Simmons Durham, both born in Arkansas and buried in Texas.

Durham has claimed to be quarter-blood Cherokee and to have grown up in a Cherokee-speaking community. He was raised in Texas, Louisiana, and Oklahoma, as his father traveled looking for work. According to Cherokee lawyer, justice and law professor Steve Russell, Durham is among "professional posers" who masquerade as Cherokee and Native American for the purposes of career advancement. Durham is described as having "made a career of being Cherokee with no known ties to any Cherokee community, although he has claimed to be Wolf Clan and to have been raised with Cherokee as a first language."

In the 1960s Durham became active in theater, performance, and literature related to the civil rights movement in the 1960s. In 1965 he moved to Austin, where he enrolled at the University of Texas at Austin and started exhibiting his work. His first solo exhibition in Austin was either in 1965 or 1968. In 1969 Durham moved to Geneva, Switzerland, where he studied at L'École des Beaux-Arts.

In June 2017, ten Cherokee tribal representatives, artists and scholars published an open letter about Durham, titled, "Dear Unsuspecting Public, Jimmie Durham Is a Trickster - Jimmie Durham’s indigenous identity has always been a fabrication and remains one":

They went on to state that by claiming to exhibit his work as a Cherokee person, Durham is in violation of the Indian Arts and Crafts Act.

In 1973, Durham returned to the United States and became involved with the American Indian Movement (AIM). From 1973 until 1980 he worked as a political organizer with AIM, becoming a member of the movement’s Central Council and representing himself as Native American. Usually he claimed to be Cherokee and wrote on behalf of the organization.

In 1974, he attended International Indian Treaty Council (IITC) conference at the Standing Rock Indian Reservation. He later became chief administrator of the IITC and worked toward the United Nations granting the IITC status as a "Category II nongovernmental organization observer and consultant under the Economic and Social Council." Durham befriended Winona LaDuke (White Earth Ojibwe) and encouraged her activism. Paul Chaat Smith (Comanche) and Durham resigned from the IITC and AIM in 1979 over disagreements about AIM's support of Cuba and other Soviet allies.