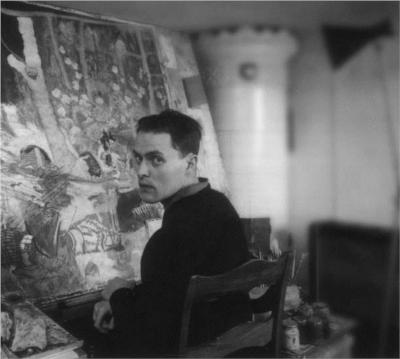 Fahlström was born in Sao Paulo, Brazil, as the only child to Frithjof Fahlström and Karin Fahlström. In July 1939 he was sent to Stockholm to visit some distant relatives and after World War II he started to study and later on to work as a writer, critic and journalist. From 1960 until 1976 he was married to the Swedish Pop painter Barbro Östlihn.

In 1953 Fahlström had his first solo exhibition, showing the drawing Opera, a room-sized felt-pen drawing. Also in 1953 he wrote Hätila ragulpr på fåtskliaben, a manifesto for concrete poetry, published in Swedish the following year and in English translation (by Mary Ellen Solt, in her anthology "Concrete Poetry. A world view") in 1968.

In 1956 Fahlström moved to Paris and lived there for three years before he moved to Front Street studio, New York City. In New York he worked with different artists and explored his role as an artist further. In 1962 he participated in the New Realists exhibition at the Sidney Janis Gallery, in New York City. His work was included in the 1964 Venice Biennale and he had a solo exhibition at Cordier & Ekstrom Inc., New York. In 1965 he joined the Sidney Janis Gallery.

Although some critics such as Frances Richard dismissed him as a "throwback to Surrealism or Agitprop at worst" other critics, such as Mary Flanagan have seen his use of games as constituting examples of critical play.

He became a productive and well-known artist who worked in many genres, often dealing with political and social issues. On Swedish television he made a name for himself after he smoked a pipe that he claimed contained hashish during a national broadcast.