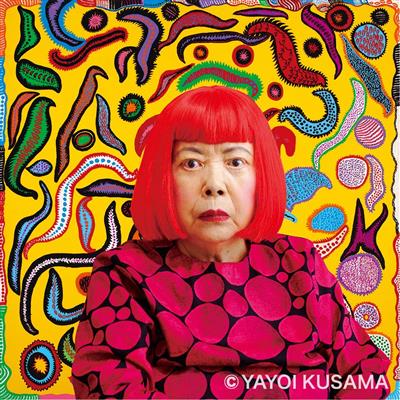 Yayoi Kusama (草間 彌生, Kusama Yayoi, born March 22, 1929) is a Japanese contemporary artist who works primarily in sculpture and installation, but is also active in painting, performance, film, fashion, poetry, fiction, and other arts. Her work is based in conceptual art and shows some attributes of feminism, minimalism, surrealism, Art Brut, pop art, and abstract expressionism, and is infused with autobiographical, psychological, and sexual content. She has been acknowledged as one of the most important living artists to come out of Japan.

Raised in Matsumoto, Kusama trained at the Kyoto School of Arts and Crafts in a traditional Japanese painting style called nihonga. Kusama was inspired, however, by American Abstract Impressionism. She moved to New York City in 1958 and was a part of the New York avant-garde scene throughout the 1960s, especially in the pop-art movement. Embracing the rise of the hippie counterculture of the late 1960s, she came to public attention when she organized a series of happenings in which naked participants were painted with brightly colored polka dots. Since the 1970s, Kusama has continued to create art, most notably installations in various museums around the world.

Born in 1929 in Matsumoto, Nagano into an affluent family of merchants who owned a plant nursery and seed farm, Kusama started creating art at an early age and began writing poetry at age 18. Her mother was apparently physically abusive, and Kusama remembers her father as "the type who would play around, who would womanize a lot". The artist says that her mother would often send her to spy on her father's extramarital affairs, which instilled within her a lifelong contempt for sexuality, particularly the male body and the phallus: "I don’t like sex. I had an obsession with sex. When I was a child, my father had lovers and I experienced seeing him. My mother sent me to spy on him. I didn’t want to have sex with anyone for years [...] The sexual obsession and fear of sex sit side by side in me."

When she was ten years old, she began to experience vivid hallucinations which she has described as "flashes of light, auras, or dense fields of dots". These hallucinations also included flowers that spoke to Kusama, and patterns in fabric that she stared at coming to life, multiplying, and engulfing or expunging her, a process which she has carried into her artistic career and which she calls "self-obliteration". She was reportedly fascinated by the smooth white stones covering the bed of the river near her family home, which she cites as another of the seminal influences behind her lasting fixation on dots.

When Kusama was 13, she was sent to work in a military factory where she was tasked with sewing and fabricating parachutes for the Japanese army, then embroiled in World War II. Discussing her time in the factory, she says that she spent her adolescence "in closed darkness" although she could always hear the air-raid alerts going off and see American B-29s flying overhead in broad daylight. Her childhood was greatly influenced by the events of the war, and she claims that it was during this period that she began to value notions of personal and creative freedom.