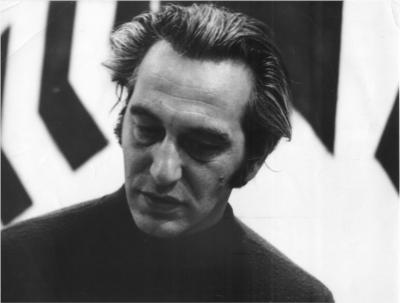 Allan D'Arcangelo (June 16, 1930 in Buffalo, New York – December 17, 1998 in New York City, New York) was an American artist and printmaker, best known for his paintings of highways and road signs that border on pop art and minimalism, precisionism and hard-edge painting, and also surrealism. His subject matter is distinctly American and evokes, at times, a cautious outlook on the future of this country.

Allan D'Arcangelo was the son of Italian immigrants. He studied at the University of Buffalo from 1948–1953, where he got his bachelor's degree in history. After college, he moved to Manhattan and picked up his studies again at the New School of Social Research and the City University of New York, City College. At this time, he encountered Abstract Expressionist painters who were in vogue at the moment. After joining the army in the mid 1950s, he used the GI Bill to study painting at Mexico City College from 1957–59.

However, he returned to New York in 1959, in search of the unique American experience. It was at this time that his painting took on a cool sensibility reminiscent of Roy Lichtenstein and Andy Warhol. However, throughout his life, D'Arcangelo remained politically active-and this is evident in his painting, though not necessarily in an overt way. His interests engaged with the environment, anti-Vietnam War protests, and the commodification and objectification of female sexuality. Through his painting and writings, it is clear that D'Arcangelo had a palpable discomfort with the social mores of his time, which can be read in the detached treatment with which he treated his subjects.

By the 1970s, D'Arcangelo had received significant recognition in the art world. He was well known for his paintings of quintessentially American highways. However, his sense of morality always trumped his interest in art world fame. In 1975, he decided to quit the gallery that had been representing him for years, Marlborough Gallery, because of the way they handled Mark Rothko's legacy. This ultimately sealed his fate of exclusion in the art establishment. He retired to a farm in Kenoza Lake with his family, where he continued to paint and even make earth works. Because of this move, D'Arcangelo's legacy is perhaps less well known than it could have been. He was considered a figure who straddled the lines between many styles of art and was hard to categorize. His cool, pop-like sensibility also met with the usual crisis concerning art movements in the contemporary art world; usually, art movements only last a decade and are then replaced with a new style. However, he did return to the city to continue teaching at Brooklyn College from 1973–1992 and the School of Visual Arts from 1982–1992, where he had also previously taught from 1963–1968. Finally, he passed away in 1998 due to complications with leukemia.

D'Arcangelo rejected Abstract Expressionism, though his early work has a painterly and somewhat expressive feel. He quickly turned to a style of art that seemed to border on Pop Art and Minimalism, Precisionism and Hard-Edge painting. Evidently, he didn't fit neatly in the category of Pop Art, though he shared subjects (women, signs, Superman) and techniques (stencil, assemblage) with these artists. To D'Arcangelo, his style was less important than the subject matter he depicted and he believed that a culture of protest and resistance was more meaningful than any aesthetic concerns. And the subject he chose to explore first and foremost was the American experience. At first he touched on specific motifs in the contemporary American consciousness, such as President Kennedy's tragic death in Place of Assassination (1965) and environmental concerns in Can Our National Bird Survive? (1962). However, he quickly turned to expansive, if detached scenes of the American highway. These paintings are reminiscent of Chirico-though perhaps not as interested in isolation-and Dali-though there is a stronger interest in the present and disinterest in the past. These paintings also have a sharp quality that is reminiscent of the precisionist style, or more specifically, Charles Sheeler. These paintings also show a deep interest in the contradictions of flatness and perspective as represented on a canvas-ideas that, likewise, artists of the Middle Ages and early Renaissance pondered often. Overall, D'Arcangelo makes an effort at distilling his subject matter into its most honest, intelligible, and synoptic descriptions; his paintings are interpretations of the American experience, not just his own memories.