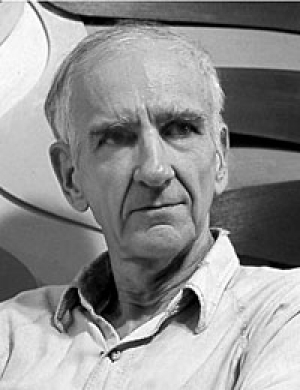 Thomas K. Wesselmann (February 23, 1931 – December 17, 2004) was an American artist associated with the Pop Art movement who worked in painting, collage and sculpture.

Wesselmann was born at Cincinnati.

From 1949 to 1951 he attended college in Ohio; first at Hiram College, and then transferred to major in Psychology at the University of Cincinnati. He was drafted into the US Army in 1952, but spent his service years stateside. During that time he made his first cartoons, and became interested in pursuing a career in cartooning. After his discharge he completed his psychology degree in 1954, whereupon he began to study drawing at the Art Academy of Cincinnati. He achieved some initial success when he sold his first cartoon strips to the magazines 1000 Jokes and True.

Cooper Union accepted him in 1956, and he continued his studies in New York. During a visit to the MoMA he was inspired by the Robert Motherwell painting Elegy to the Spanish Republic: “The first aesthetic experience… He felt a sensation of high visceral excitement in his stomach, and it seemed as though his eyes and stomach were directly connected”.

Wesselmann also admired the work of Willem de Kooning, but he soon rejected action painting: “He realized he had to find his own passion he felt he had to deny to himself all that he loved in de Kooning, and go in as opposite a direction as possible."

For Wesselmann, 1958 was a pivotal year. A landscape painting trip to Cooper Union's Green Camp in rural New Jersey, brought him to the realization that he could pursue painting, rather than cartooning, as a career.

After graduation, Wesselmann became one of the founding members of the Judson Gallery, along with Marc Ratliff and Jim Dine, also from Cincinnati, who had just arrived in New York. He and Ratliff showed a number of small collages in a two-man exhibition at Judson Gallery. He began to teach art at a public school in Brooklyn, and later at the High School of Art and Design.

Wesselmann's series Great American Nude (begun 1961) first brought him to the attention of the art world. After a dream concerning the phrase "red, white, and blue", he decided to paint a Great American Nude in a palette limited to those colors and any colors associated with patriotic motifs such as gold and khaki. The series incorporated representational images with an accordingly patriotic theme, such as American landscape photos and portraits of founding fathers. Often these images were collaged from magazines and discarded posters, which called for a larger format than Wesselmann had used previously. As works began to approach a giant scale he approached advertisers directly to acquire billboards.

Through Henry Geldzahler, Wesselmann met Alex Katz, who offered him a show at the Tanager Gallery. Wesselmann's first solo show was held there later that year, representing both the large and small Great American Nude collages. In 1962, Richard Bellamy offered him a one-man exhibition at the Green Gallery. About the same time, Ivan Karp of the Leo Castelli Gallery put Wesselmann in touch with several collectors and talked to him about Roy Lichtenstein and James Rosenquist’s works. These Wesselmann viewed without noting any similarities with his own {S. Stealingworth, p. 25}.