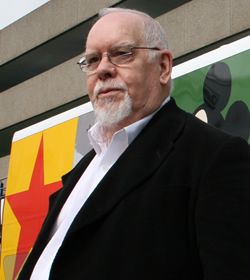 One of the best known British pop artists, Blake is considered to be a prominent figure in the pop art movement. Central to his paintings are his interest in images from popular culture which have infused his collages. In 2002 he was knighted at Buckingham Palace for his services to art.

Peter Blake was born in Dartford, Kent, on 25 June 1932. He was educated at the Gravesend Technical College school of art, and the Royal College of Art.

During the late 1950s, Blake became one of the best known British pop artists. His paintings from this time included imagery from advertisements, music hall entertainment, and wrestlers, often including collaged elements. Blake was included in group exhibitions at the Institute of Contemporary Arts and had his first solo exhibition in 1960. In the 'Young Contemporaries' exhibition of 1961 in which he exhibited alongside David Hockney and R.B. Kitaj, he was first identified with the emerging British Pop Art movement. Blake won the (1961) John Moores junior award for Self Portrait with Badges. He came to wider public attention when, along with Pauline Boty, Derek Boshier and Peter Phillips, he featured in Ken Russell's Monitor film on pop art, Pop Goes the Easel, broadcast on BBC television in 1962. From 1963 Blake was represented by Robert Fraser placing him at the centre of swinging London and brought him into contact with leading figures of popular culture. His Captain Webb Matchbox piece is another of his works in the pop art movement.

On the Balcony (1955–57) is a significant early work which remains an iconic piece of British Pop Art, showing Blake's interest in combining images from pop culture with fine art. The work, which appears to be a collage but is wholly painted, shows, among other things, a boy on the left of the composition holding Édouard Manet's The Balcony, badges and magazines. It was inspired by a painting by Honoré Sharrer depicting workers holding famous paintings, Workers and Paintings.. At the "Pop Art in Changing Britain" exhibit and as reported by The Telegraph on February 21 of 2018, his "Girls with their hero", a 1959 painting of facets of Elvis Presley was said to have "fashioned a highly personal form of Pop Art, infused by nostalgia for Victoriana and a long-lost world of native pastimes". Blake has referred to the work of other artists many times. Another example, The First Real Target (1961) a standard archery target with the title written across the top is a play on paintings of targets by Kenneth Noland and Jasper Johns.

Blake painted several album sleeves. He designed the sleeve for Sgt. Pepper's Lonely Hearts Club Band with his wife Jann Haworth, the American-born artist whom he married in 1963 and divorced in 1979. The Sgt. Pepper's sleeve has become an iconic work of pop art, much imitated and Blake's best-known work. Producing the collage necessitated the construction of a set with cut-out photographs and objects, such as flowers, centred on a drum (sold in auction in 2008) with the title of the album. Blake has subsequently complained about the one-off fee he received for the design (£200), with no subsequent royalties. Blake made sleeves for the Band Aid single, "Do They Know It's Christmas?" (1984), Paul Weller's Stanley Road (1995) and the Ian Dury tribute album Brand New Boots and Panties (2001; Blake was Dury's tutor at the Royal College of Art in the mid-60s). He designed the sleeves for Pentangle's Sweet Child and The Who's Face Dances (1981), which features portraits of the band by a number of artists.