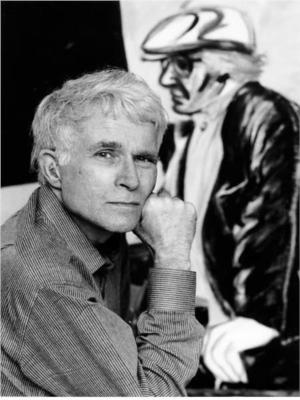 Born in Chagrin Falls, Ohio, United States, his Hungarian father, Sigmund Benway, left his mother, Jeanne Brooks, shortly after he was born and they were divorced in 1934. His mother was the American-born daughter of Russian-Jewish immigrants. She worked in a steel mill and as a teacher. She remarried in 1941, to Dr. Walter Kitaj, a Viennese refugee research chemist, and Ronald took his surname. His mother and stepfather were non-practicing Jews. He was educated at Troy High School. He became a merchant seaman with a Norwegian freighter when he was 17. He studied at the Akademie der bildenden Künste in Vienna and the Cooper Union in New York City. After serving in the United States Army for two years, in France and Germany, he moved to England to study at the Ruskin School of Drawing and Fine Art in Oxford (1958–59) under the G.I. Bill, where he developed a love of Cézanne, and then at the Royal College of Art in London (1959–61), alongside David Hockney, Derek Boshier, Peter Phillips, Allen Jones and Patrick Caulfield. Richard Wollheim, the philosopher and David Hockney remained lifelong friends.

Kitaj married his first wife, Elsi Roessler, in 1953; they had a son, screenwriter Lem Dobbs, and adopted a daughter, Dominie. His first wife committed suicide in 1969. After living together for 12 years, he married Sandra Fisher in December 1983; they had one son, Max. Sandra Fisher died in 1994, at age 47, from hyperacute haemorrhagic leuco-encephalitis (not an aneurysm, as is commonly written). Kitaj had a mild heart attack in 1990. He died in Los Angeles in October 2007, eight days before his 75th birthday. Seven weeks after Kitaj's death, the Los Angeles County coroner ruled that the cause of death was suicide by suffocation, saying the artist placed a plastic bag over his head.

Kitaj settled in England, and through the 1960s taught at the Ealing Art College, the Camberwell School of Art and the Slade School of Art. He also taught at the University of California, Berkeley in 1968. He staged his first solo exhibition at Marlborough New London Gallery in London in 1963, entitled "Pictures with commentary, Pictures without commentary", in which text included in the pictures and the accompanying catalogue referred to a range of literature and history, citing Aby Warburg's analysis of symbolic forms as a major influence.

He curated an exhibition for the Arts Council at the Hayward Gallery in 1976, entitled "The Human Clay" (an allusion to a line by W. H. Auden), including works by 48 London artists, such as William Roberts, Richard Carline, Colin Self and Maggi Hambling, championing the cause of figurative art at a time when abstract was dominant. In an essay in the controversial catalogue, he invented the phrase the "School of London" to describe painters such as Frank Auerbach, Leon Kossoff, Francis Bacon, Lucian Freud, Euan Uglow, Michael Andrews, Reginald Gray, Peter de Francia and himself.