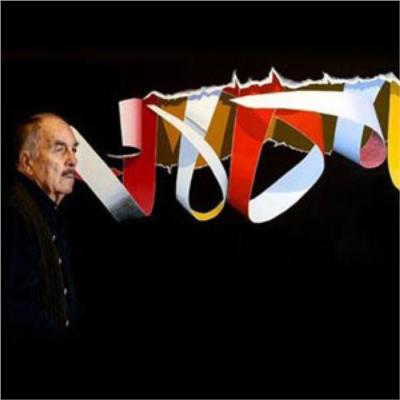 Burhan C. Doğançay (11 September 1929 – 16 January 2013) was a Turkish-American artist. Doğançay is best known for tracking walls in various cities across the world for half a century, integrating them in his artistic work.

Born in Istanbul, Turkey, Burhan Dogançay obtained his artistic training from his father Adil Doğançay, and Arif Kaptan, both well-known Turkish painters. In his youth, Dogançay played on the Turkish Gençlerbirliği soccer team. In 1950, he received a law degree from the University of Ankara. While enrolled at the University of Paris between 1950–1955 from where he obtained a doctorate degree in economics, he attended art courses at the Académie de la Grande Chaumière. During this period he continued to paint regularly and to show his works in several group exhibitions. Soon after his return to Turkey, he participated in many exhibitions, including joint exhibitions with his father at the Ankara Art Lovers Club.

Following a brief career with the government (diplomatic service) which brought him to New York City in 1962, Dogançay decided in 1964 to devote himself entirely to art and make New York his permanent home. He starts searching the streets of New York for inspiration and raw materials for his collage and assemblages. Despite working hard, it seems impossible to make a reasonable living. Thomas M. Messer, director of the Solomon R. Guggenheim Museum for 27 years, significantly influences Dogançay's career, urging him to stay in New York and face the city's challenges. In the 1970s, he starts traveling for his "Walls of the World" photographic documentary project and meets his future wife, Angela, at the Hungarian Ball at the Hotel Pierre, New York. In 2006, a painting by Dogancay titled "Trojan Horse" was gifted by the Turkish government to the OECD in Paris. Dogançay worked and divided the last eight years of his life between his studios in New York and Turgutreis, Turkey, until his death at the age of 83 in January 2013.

Since the early 1960s, Dogançay had been fascinated by urban walls and chose them as his subject. He saw them as the barometer of our society and a testament to the passage of time, reflecting the emotions of the city, frequently withstanding the assault of the elements and the markings left by people. It began, Dogancay said, when something caught his eye during a walk stroll down 86th street in New York:

As a city traveler, for half a century he has been mapping walls in various cities worldwide. In this context, urban walls serve as documents of the respective climate and zeitgeist, as ciphers of social, political and economic change. Part of the intrinsic spirit of his work is to suggest that nothing is ever what it seems. Dogançay's art is wall art, and thus his sources of subjects are real. Therefore, he can hardly be labeled as an abstract artist, and yet at first acquaintance much of his work appears to be abstract. In Dogancay's approach, the serial nature of investigation and the elevation of characteristic elements to form ornamental patterns are essential. Within this, he formulates a consistent continuation of decollagist strategies – effectively the re-contextualised deconstruction of positions related to the nouveau réalistes. Dogançay may have started out as a simple observer and recorder of walls, but he fast made a transition to points where he could express a range of ideas, feelings, and emotions in his work. His vision has continued to broaden, driven both by content and technique.