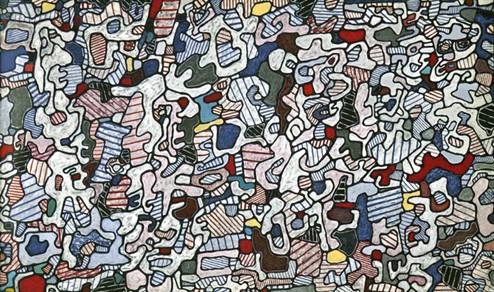 Art brut is a French term that translates as 'raw art', invented by the French artist Jean Dubuffet to describe art which is made outside the academic tradition. Dubuffet, the most important French artist to emerge after World War II, became interested in the art of the mentally ill in mid-career, after studying The Art of the Insane (1922) by the Swiss psychiatrist Hans Prinzhorn. Dubuffet applied the name Art Brut to the drawings, paintings, and doodlings of the psychotic, the naive, and the primitive, works that he regarded as the purest forms of creative expression. Like the early Cubists’ discovery of primitive Oceanian and African sculpture, Dubuffet’s study of this type of art gave him the inspiration he sought for his own art, as it represented for him the most authentic expression of emotion and human values.

Originally inspired by the childlike art of the Swiss painter Paul Klee, from the 1940s on, Dubuffet’s paintings emulated the sincerity and naiveté that he associated with real art brut. The first of these works shows a childlike vision of humanity and civilization, with bright, gay colors and naive drawing. Later works, passionate and primitive, sometimes pathetic, sometimes obscene, incorporate forms derived from graffiti and psychotic art; painted in thick impasto or constructed in collage, these densely detailed and intensely expressive works convey a sense of teeming life and brutal force.

Although Dubuffet's category of Art Brut embraces any painting or sculpture created outside the confines of contemporary or traditional culture - and thus free from cultural manipulation or influence - he personally was mainly interested in a specific sub-category of this raw art: namely, works by patients in mental hospitals.

Dubuffet's fascination with Insane Art was based on its supposed creative purity and on the inspiration it gave his own work. In short, he believed that only Art Brut was untarnished by contact with prevailing cultural values, and this spontaneous expressionism inspired his own original childlike drawings, graffiti scribblings, and signs, and was the conceptual base for his primitive-style structure executed without any sense of composition or clear aesthetic characteristics. His sculpture too was based on similar efforts by Art Brut artists. As well as papier mache, hardboard, and planks of wood and a range of "found objects" in the style of Marcel Duchamp's readymades, Dubuffet also mixed grease, sand, and plaster with gloss paint to create a suitably "raw" medium. Ironically, praising Art Brut artists for originality and freedom from imitation, Dubuffet imitated their work so thoroughly that was accused of plagiarism multiple times.

Materials used by Art Brut rtists are not necessarily art materials. It is rare for artists categorized in this way to make straightforward oil paintings or sculptures from bronze or clay. More typically, and thus showing unusual and robust resourcefulness, they use whatever they can get their hands on, be it mud, blood, crayons, or a simple ink pen. This immediacy of material exposes the intense need to create and furthermore illustrates that the works made are very much extensions of ongoing reflective selfhood, rather than separate artworks.