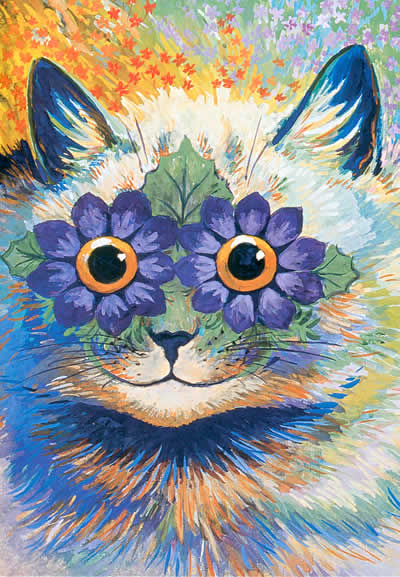 Outsider art is art by self-taught or naïve art makers. Typically, those labeled as outsider artists have little or no contact with the mainstream art world or art institutions. In many cases, their work is discovered only after their deaths. Often, outsider art illustrates extreme mental states, unconventional ideas, or elaborate fantasy worlds.

The term outsider art was coined by art critic Roger Cardinal in 1972 as an English synonym for art brut (French: [aʁ bʁyt], "raw art" or "rough art"), a label created by French artist Jean Dubuffet to describe art created outside the boundaries of official culture; Dubuffet focused particularly on art by those on the outside of the established art scene, using as examples psychiatric hospital patients and children.

Outsider art has emerged as a successful art marketing category; an annual Outsider Art Fair has taken place in New York since 1993, and there are at least two regularly published journals dedicated to the subject. The term is sometimes misapplied as a catch-all marketing label for art created by people who are outside the mainstream "art world" or "art gallery system", regardless of their circumstances or the content of their work.

Interest in the art of the mentally ill, along with that of children and the makers of "peasant art", was first demonstrated by "Der Blaue Reiter" group: Wassily Kandinsky, Auguste Macke, Franz Marc, Alexej Jawlensky, and others. What the artists perceived in the work of these groups was an expressive power born of their perceived lack of sophistication. Examples of this were reproduced in 1912 in the first and only issue of their publication, Der Blaue Reiter Almanac. During World War I, Macke was killed at Champagne in 1914 and Marc was killed at Verdun in 1916; the gap left by these deaths was to some extent filled by Paul Klee, who continued to draw inspiration from these 'primitives'.

Interest in the art of insane asylum inmates continued to grow in the 1920s. In 1921, Dr. Walter Morgenthaler published his book Ein Geisteskranker als Künstler (A Psychiatric Patient as Artist) about Adolf Wölfli, a psychotic mental patient in his care. Wölfli had spontaneously taken up drawing, and this activity seemed to calm him. His most outstanding work was an illustrated epic of 45 volumes in which he narrated his own imaginary life story. With 25,000 pages, 1,600 illustrations, and 1,500 collages, it is a monumental work. Wölfli also produced a large number of smaller works, some of which were sold or given as gifts. His work is on display at the Adolf Wölfli Foundation in the Museum of Fine Art, Bern.

A defining moment was the publication of Bildnerei der Geisteskranken (Artistry of the mentally ill) in 1922, by Dr. Hans Prinzhorn. This was the first formal study of psychiatric works, based upon a compilation of thousands of examples from European institutions. The book and the art collection gained much attention from avant-garde artists of the time, including Paul Klee, Max Ernst, and Jean Dubuffet.