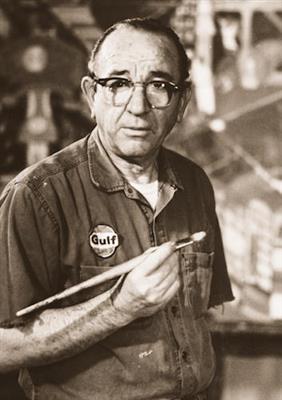 
Ralph Fasanella was born to Joseph and Ginevra (Spagnoletti), Italian immigrants, in the Bronx on Labor Day in 1914. He was the third of six children. His father delivered ice to local homes. His mother worked in a neighborhood dress shop drilling holes into buttons, and spent her spare time as an anti-fascist activist.


Fasanella spent much of his youth delivering ice with his father from a horse-driven wagon. This experience deeply impressed him. He saw his father as representative of all working men, beaten down day after day and struggling for survival. "Fasanella later said that the compositional density of his pictures was influenced by the experience of helping his father deliver ice, which involved removing all the food from customers' refrigerators and arranging it in neatly ordered stacks."


Fasanella's mother was a literate, sensitive, progressive woman. She instilled in Fasanella a strong sense of social justice and political awareness. Fasanella began accompanying his mother when she worked on anti-fascist and trade union causes. Fasanella also helped his mother publish and distribute a small Italian-language, anti-fascist newspaper to help support the family.


Joseph Fasanella abandoned his family and returned to Italy in the 1920s. This increased the influence Fasanella's mother had over young Ralph, but it also led to some behavioral problems.


Fasanella served two stints in reform schools run by the Catholic Church for truancy and running away from home. He later said he was sexually abused ("used as a girl") by the priests. These experiences instilled a deep dislike for authority and reinforced Fasanella's hatred for anything which broke people's spirits. Fasanella later depicted his experience in reform school in a painting titled Lineup at the Protectory 2 (1961). The melancholy image features rows of boys standing at attention, watched over by scowling, ominous-looking priests. Fasanella quit school after the sixth grade.


During the Great Depression, Fasanella worked as a textile worker in garment factories and as a truck driver. He became a member of United Electrical, Radio and Machine Workers of America (UE) Local 1227 while working as a machinist in Brooklyn. He became strongly aware of the growing economic and social injustice in the U.S., as well as the plight and powerlessness of the working class.


After the Spanish Civil War, Fasanella returned to the United States, where he began organizing labor unions.


Fasanella joined the UE staff in 1940. He organized a Western Electric manufacturing plant in Manhattan, a Sperry Gyroscope factory, and a number of other electrical equipment and machine plants in and around New York City. One of his later paintings shows a union organizing committee meeting being held in a UE hall.


It was during a UE organizing drive in 1940 that Fasanella first began to draw.