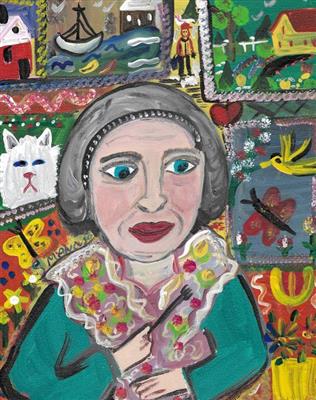 Maud Kathleen Lewis (née Dowley; March 7, 1903 – July 30, 1970) was a Canadian folk artist from Nova Scotia. Living in poverty with her husband in a small house in Marshalltown, Nova Scotia, most of her life, she achieved national recognition in 1964 and 1965. Several books, plays and films have since been produced about her. Lewis remains one of Canada's best-known folk artists. Her works and the restored Maud Lewis House are displayed in the Art Gallery of Nova Scotia.


Lewis was born Maud Kathleen Dowley on March 7, 1903 in South Ohio, Nova Scotia, the daughter of John and Agnes (Germain) Dowley. She had one brother. Dowley was born with birth defects and came to develop rheumatoid arthritis, which reduced her mobility, especially in her hands. Dowley was introduced to art by her mother, who instructed her in the making of watercolour Christmas cards to sell. She began her artistic career by selling hand-drawn and painted Christmas cards.


Maud became involved with Emery Allen, also of Digby, who has been described as the love of her life. She gave birth to their daughter, Catherine Dowley, in 1928 out of wedlock. Allen abandoned Dowley and their daughter. Maud continued to live at home with her parents. It was arranged by the court for her daughter Catherine to be adopted, as Dowley had no way to support her. Later in life Catherine married Paul Muise and had her own family; they lived in Nova Scotia and Ontario. She apparently tried to contact her mother, but was not successful.


In 1935, her father John died and in 1937, her mother Agnes died. As was typical of the time, her brother inherited the family home. After living with her brother for a short while, Dowley moved to Digby, Nova Scotia to live with her aunt.


When Dowley was 34, she married Everett Lewis, a fish peddler from Marshalltown, on January 16, 1938. He also worked as the watchman at the county Poor Farm. According to Everett, Maud Dowley showed up at his door step in response to an advertisement he had posted in the local stores for a "live-in or keep house" for a forty-year-old bachelor. Several weeks later, they married.


They lived in Everett's one-room house with a sleeping loft in Marshalltown, a few miles west of Digby. Maud used this house as her studio. Everett took care of the housework. Lewis and her husband lived mostly in poverty in the one-room house. After their deaths, the house was purchased by a local group. It was acquired by the province and transferred to the Art Gallery of Nova Scotia in Halifax. They had the tiny house restored and it is now part of a permanent display on Maud Lewis and her works.


Maud Lewis accompanied her husband on his daily rounds peddling fish door-to-door, bringing along Christmas cards that she had drawn. She would sell the cards for twenty-five cents each. These cards proved popular with her husband's customers, and she began painting. Everett encouraged Lewis to paint, and he bought her her first set of oils.