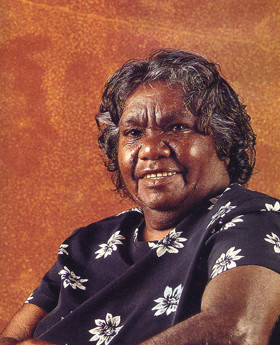 Kathleen Petyarre (born Kweyetwemp Petyarre; c. 1940) is an Australian Aboriginal artist. Her art refers directly to her country and her Dreamings. Petyarre's paintings have occasionally been compared to the works of American Abstract Expressionists Jackson Pollock and Mark Rothko, and even to those of J.M.W. Turner. She has won several awards and is considered one of the 'most collectible artists in Australia'. Her works are in great demand at auctions. However, due to ongoing health problems, she has now all but retired from painting.

Kathleen Petyarre was born at Atnangkere, an important water soakage for Aboriginal people on the western boundary of Utopia Station, 150 miles (240 km) north-east of Alice Springs in Australia's Northern Territory. She belongs to the Alyawarre/Eastern Anmatyerre clan and speaks Eastern Anmatyerre, with English as her second language. Petyarre is the niece of the influential Aboriginal artist Emily Kame Kngwarreye and has several sisters who are also well-known artists in their own right, among them Gloria, Violet, Myrtle and Jeanna Petyarre. Kathleen, with her daughter Margaret and her sisters, settled at Iylenty (Mosquito Bore) at Utopia Station, near her birthplace.

Petyarre was introduced to the batik medium at a hippy commune on a visit to Wollongong, New South Wales, and began making her own in 1977 with the support and encouragement of the linguist and adult education instructor Jenny Green. Petyarre continued to produce batiks with other women at Utopia until the late 1980s, when, prompted by allergies to the chemicals they were using, she began developing her signature style painting with acrylic on canvas.

Petyarre's technique consists of layering very fine dots of thin acrylic paint onto the canvas, evoking the Aboriginal custom of ceremonial body painting, to carefully construct abstract landscapes that reveal a remarkable depth when viewed up close. The dots are used to represent, among other things, flowers and spinifex, or animated clouds of sand, hail or even bush seeds. Meanwhile, various shapes and colours are used to depict geographical features such as sand-hills, watercourses and rockholes. Her imagery has been described as “simultaneously macro- and microcosmic”.

Most of Petyarre's paintings detail the journeys of her Dreaming Ancestor, Arnkerrth, the Old Woman Mountain Devil, and are indicative of the Aborigines' traditional land navigation skills. She adopts an aerial view typical of her region's artworks to reconstruct memorised landscapes and express her Dreamings as “a barely tangible, shadowy palimpsest, overwritten, as it were, by the surface colours and movement”. She describes her paintings as “like looking down on my country during the hot time, when the country changes colour... I love to make the painting like it’s moving, travelling, but it’s still our body painting, still our ceremony.”

Since about 2003–2004, Petyarre's style has become bolder, with clusters of larger dots and stronger lines alongside the very fine textures for which the artist is known. While this style has been decried in some quarters as being less refined, it has also been hailed as a logical artistic development towards a more powerful and dramatic mode of expression, "perhaps more abstract, certainly more modern in its technicality and presentation”.