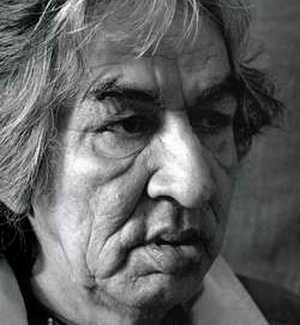 Norval Morrisseau, CM (March 14, 1932 – December 4, 2007), also known as Copper Thunderbird, was an Aboriginal Canadian artist. Known as the "Picasso of the North", Morrisseau created works depicting the legends of his people, the cultural and political tensions between native Canadian and European traditions, his existential struggles, and his deep spirituality and mysticism. His style is characterized by thick black outlines and bright colors. He founded the Woodlands School of Canadian art and was a prominent member of the “Indian Group of Seven”.

An Anishinaabe, he was born March 14, 1931 on the Sand Point Ojibway reserve near Beardmore, Ontario. Some sources quote him as saying that he was born in Fort William, now part of Thunder Bay, Ontario, on the same date in 1931. His full name is Jean-Baptiste Norman Henry Morrisseau, but he signs his work using the Cree syllabics writing ᐅᓵᐚᐱᐦᑯᐱᓀᐦᓯ (Ozaawaabiko-binesi, unpointed: ᐅᓴᐘᐱᑯᐱᓀᓯ, "Copper/Brass [Thunder]Bird"), as his pen-name for his Anishnaabe name ᒥᐢᒁᐱᐦᐠ ᐊᓂᒥᐦᑮ (Miskwaabik Animikii, unpointed: ᒥᐢᑿᐱᐠ ᐊᓂᒥᑭ, "Copper Thunderbird").

In accordance with Anishnaabe tradition, he was raised by his maternal grandparents. His grandfather, Moses Potan Nanakonagos, a shaman, taught him the traditions and legends of his people. His grandmother, Grace Theresa Potan Nanakonagos, was a devout Catholic and from her he learned the tenets of Christianity. The contrast between these two religious traditions became an important factor in his intellectual and artistic development.

At the age of six, he was sent to a Catholic residential school, where students were educated in the European tradition, native culture was repressed, and the use of native language was forbidden. After two years he returned home and started attending a local community school.

At the age of 19, he became very sick. He was taken to a doctor but his health kept deteriorating. Fearing for his life, his mother called a medicine-woman who performed a renaming ceremony: She gave him the new name Copper Thunderbird. According to Anishnaabe tradition, giving a powerful name to a dying person can give them new energy and save their lives. Morrisseau recovered after the ceremony and from then on always signed his works with his new name.

Morrisseau contracted tuberculosis in 1956 and was sent to Fort William Sanatorium to recover. There he met his future wife Harriet Kakegamic with whom he had seven children, Victoria, Michael, Peter, David, Lisa, Eugene, and Christian.

After being invited by Ontario Provincial Police Constable, Robert Sheppard, to meet the artist, the anthropologist Selwyn Dewdney, became an early advocate of Morrisseau's and was very interested in Morrisseau's deep knowledge of native culture and myth. Dewdney was the first to take his art to a wider public.

Jack Pollock, a Toronto art dealer, helped expose Morrisseau's art to a wider audience in the 1960s. The two initially met in 1962 while Pollock was teaching a painting workshop in Beardmore. As Pollock did not drive, Susan Ross whom Morrisseau had met in 1961 and Sheila Burnford drove Pollock to visit Morrisseau at his home to view more of his works. Immediately struck by the genius of Morrisseau's art, he immediately organized an exhibition of his work at his Toronto gallery.