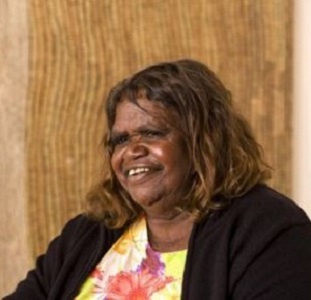 Doreen Reid Nakamarra (c. 1955 - 20 October 2009) was an Australian Aboriginal artist and painter. Reid was considered an important artist within the Western Desert cultural bloc. She was a leading painter at the Papunya Tula artist cooperative in Central Australia.

Reid was born in Mummine near Warburton, Western Australia in the mid-1950s. In 1984, Reid and her husband George Tjampu Tjapaltjarri, who subsequently established himself as a Papunya Tula painter, settled at the new community of Kiwirrkurra, to be closer to her husband's country. In 2007, Reid's work was displayed at the National Gallery of Australia's Culture Warriors exhibition. The exhibit, including Reid's pieces, toured Australia state galleries before opening at the Katzen Arts Center in Washington D.C. in September 2009.

Additionally, Reid's work was featured at the Moscow Biennale of Contemporary Art in 2009. She was awarded the Telstra National Aboriginal and Torres Strait Islander Art Award general painting prize in 2008 for an untitled work. The work depicts designs associated with the Marrapinti rockhole site, west of the Pollock Hills in Western Australia.

In September 2009, Reid travelled to New York City for the opening of a Papunya Tula art exhibition which included her work. The New York exhibition was opened by Hetti Perkins, the curator of Aboriginal and Torres Strait Islander art at the Art Gallery of New South Wales in Sydney.

Paul Sweeney, the general manager of Papunya Tula, praised Reid as an important artist and spokesperson.