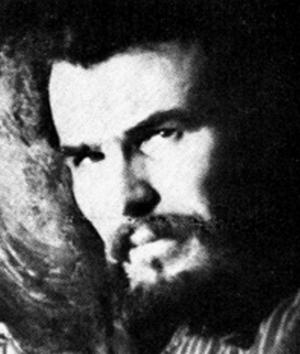 Nedelchev was born in the village of Ezerche, a mixed community of Christians and Muslims, 50 km from the river port of Rousse on the Danube. His family were farmers and peasant artisans, his mother a weaver and his father a wood carver. From an early age Nedelchev was a compulsive drawer.

At fifteen, after a quarrel with his father, Nedelchev ran away from home to the Black Sea coast, taking various jobs to survive. At eighteen, he was conscripted into the army for three years of national service. On completion, he enrolled at the newly formed state art school in Rousse where he met painter Marko Monev and shared a studio.

In 1963 Nedelchev and Monev journeyed widely through rural Bulgaria, sketching and painting, and attempting to make contact with other artists as they travelled. This period in Bulgarian history was a time when the conditions of the peasantry were being vastly transformed by the collectivisation process, Nedelchev and Monev observed the dying ways and traditions and this is reflected in their works. In 1964 the two ended their travels back at the Danube. Nedelchev was befriended by the artist Trifon Nikolov, and for a time lived and painted in his studio.

By 1966 Nedelchev was starting to have regular exhibitions and at one of these he met his future wife, Mariya. In 1968 they married and moved to Razgrad where Nedelchev formed a local Union of Artists. In 1971 Nedelchev’s art was discovered for the first time outside of Bulgaria where, in Switzerland, art critic and writer Anatole Jakovsky awarded him a special prize in a worldwide competition for naive art. A series of exhibitions followed and Nedelchev visited Paris for the first time, although it was made clear by the communist authorities that this visit was a privilege.

In fact, Nedelchev had favourable offers of help to leave Bulgaria and start a new life in the West, but he preferred to stay in his homeland, despite the restrictions imposed there. Consequently, lack of access to Western galleries and the art market precluded Nedelchev from following a career path as any Western artist might perceive it. Nevertheless, Nedelchev’s work has found its way into many private and corporate collections, as well as into the hands of many foreign ambassadors and politicians. Examples are the Krupp Corporation — Germany, Bhabha Atomic Research Centre – India, and ex-Chinese Premier Li Peng.