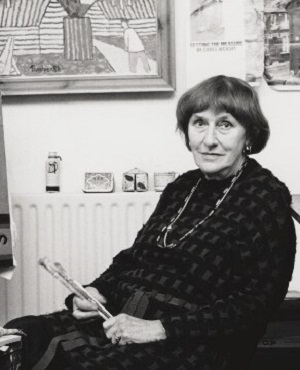 Sometimes mistakenly described as the daughter of Roy Fedden (who was in fact her uncle, as was Romilly Fedden), Mary Fedden was born in Bristol where she attended the city's Badminton School. She studied at the Slade School of Fine Arts, London from 1932 to 1936. She then returned to Bristol where she painted and taught until World War II broke out. After the war was over, Fedden developed her own style of flower paintings and still lifes, reminiscent of artists such as Matisse and Braque.

In 1951, Mary Fedden married the artist Julian Trevelyan. In 1956, Fedden became a member of the London Group and became the chairperson of the Women's International Art Club, a post she held for three years. She went on to teach painting at the Royal College of Art from 1956 to 1964, the first woman tutor to teach in the Painting School. Her pupils included David Hockney and Allen Jones. She subsequently taught at the Yehudi Menuhin School in Cobham, Surrey, from 1965 to 1970.

In 1995, she acknowledged in an interview in The Artist magazine:

Fedden’s subjects are often executed in a bold, expressive style with vivid, contrasting colours, although her work of 2005-6 uses a narrower tonal range. Her still lifes are often placed in front of a landscape, as she enjoyed the contrasting of disparate, even quirky elements. When using watercolours she emphasised the rough texture of her favourite Indian papers.

Fedden exhibited in one-person shows throughout the UK every year from 1950 until her death in 2012. These included the Redfern Gallery, London from 1953, the New Grafton Gallery, London from the 1960s, the Hamet Gallery from 1970, the Arnolfini Gallery, Bristol, Bohun Gallery, Henley on Thames from 1984 and at the Beaux Arts Gallery, London in the 1990s. A major exhibition of her work was held at the Royal West of England Academy in 1996.

She also received several commissions for murals, notably the Festival of Britain in 1951, the P&O liner Canberra in 1961, Charing Cross Hospital in 1980 (along with her husband, Julian Trevelyan), Colindale Hospital in 1985, and for schools in Bristol, Hertfordshire and London. Her work can be found in numerous public and private collections such as the Chantrey Bequest for the Tate Gallery, Contemporary Art Society, and the City art galleries of Carlisle, Hull, Bristol, Edinburgh and Sheffield.

In 1995 the writer and critic Mel Gooding wrote a monograph on her work tracing her long career up to her marriage to Julian Trevelyan and their life together on the Thames at Chiswick, London. In 2007, a second book on Fedden written by Christopher Andreae was published, tracing her whole career up to 2006.