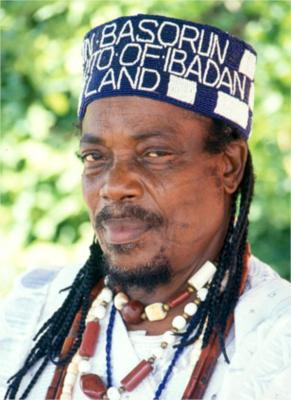 He was born as Omoba Taiwo Olaniyi Oyewale-Toyeje Oyekale Osuntoki to a father, Aitoyeje, who was a Muslim from Ibadan, and a mother, Mary, who was a Christian from Ogidi. The name by which he became known alludes to the fact that he was the only surviving child of seven sets of twins born to his mother.

Twins Seven-Seven was an itinerant singer and dancer before he began his career as an artist, first attending in 1964 an Mbari Mbayo workshop conducted by Ulli Beier and Georgina Beier in Osogbo, a Yoruba town in southwestern Nigeria. He went on to become one of the best known artists of the Osogbo School.

His work is influenced by traditional Yoruba mythology and culture, and creates a fantastic universe of humans, animals, plants and Yoruba gods. Visually, his work resembles Yoruba carvings in the segmentation, division and repetition of his compositions; conceptually, it reflects this influence in the emphasis on transformation and balance, as well as its embodiment of dualities such as the earthly and the spiritual, past and present, industry and agriculture. Early works such as Dreams of the Abiku Child (1967) make allusion to concepts or figures in Yoruba cosmology and mythology, such as the abiku (devil child), and the orisha Osun. However, Twins Seven Seven also described his work as "contemporary Yoruba traditional art," not only paying homage to the influence of his cultural background but also to noting his responsiveness to current events and the postcolonial experience.

In 1972 Twins Seven Seven taught in the US at Merced College in California and at the Haystack Mountain Crafts School, Deer Isle.

In July 1982, he survived a car crash — although a radio announcement of his death was made after he was pulled unconscious from the wrecked vehicle. The radio announced his death — and after being given an artificial hip and confined to bed for 18 months.

In the 1990s his work appeared in major exhibitions in Spain, Finland, Mexico, the Netherlands, England, Germany, and the US.

He was designated UNESCO Artist for Peace on 25 May 2005 "in recognition of his contribution to the promotion of dialogue and understanding among peoples, particularly in Africa and the African Diaspora".