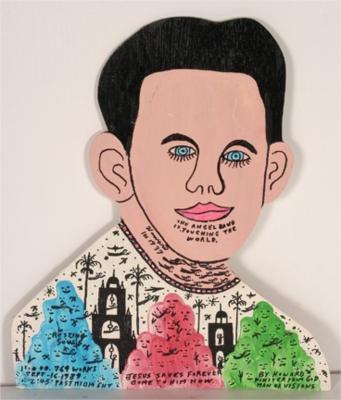 Howard Finster (December 2, 1916 – October 22, 2001) was an American artist and Baptist minister from Georgia. He claimed to be inspired by God to spread the gospel through the design of his swampy land into Paradise Garden, a folk art sculpture garden with over 46,000 pieces of art. His creations include outsider art, naïve art, and visionary art. Finster came to widespread notice in the 1980s with his album cover designs for R.E.M. and Talking Heads.

Finster was born at Valley Head, Alabama, and lived on the family farm as one of 13 children. He attended school from age six into the sixth grade. He said he had his first vision at the age of three years, when he saw his recently deceased sister Abbie Rose walking down out of the sky wearing a white gown. She told him, "Howard, you're gonna be a man of visions."

He became "born again" at a Baptist revival at the age of 13 and began to preach at 16. He gave the occasional sermon at local churches and wrote articles for the town newspaper, and became a full-time pastor at Rock Bridge Baptist Church in 1940. He later served at the Mount Carmel Baptist Church in Fort Payne, Alabama, shortly before venturing into full-time art.

Finster began building his first garden park museum in Trion, Georgia, in the late 1940s. It featured an exhibit on the inventions of mankind in which Finster planned to display one of everything that had ever been invented, models of houses and churches, a pigeon flock and a duck pond.

When he ran out of land in Trion in 1961, he moved to Pennville, Georgia, near Summerville, and bought four acres (16,000 m²) of land upon which to build the Plant Farm Museum "to show all the wonderful things o' God's Creation, kinda like the Garden of Eden." It features such attractions as the "Bible House," "the Mirror House," "the Hubcap Tower," "the Bicycle Tower," "the Machine Gun Nest," and the largest structure in the garden, the five-story "Folk Art Chapel." He also started putting up signs with Bible verses on them because "he felt that they stuck in people's heads better that way."

He retired from preaching in 1965 and focused all of his time on improving the Plant Farm Museum. In 1976, he had another vision to paint sacred art. According to Finster, "...one day I was workin' on a patch job on a bicycle, and I was rubbin' some white paint on that patch with this finger here, and I looked at the round tip o' my finger, and there was a human face on it... then a warm feelin' come over my body, and a voice spoke to me and said, 'Paint sacred art.'"

His diverse range of subjects include pop culture icons like Elvis Presley, historical figures like George Washington, Ronald Reagan, religious images like The Devils Vice and "John the Baptist," UFOs and aliens, war and politics. His paintings are colorful and detailed; they use flat picture plane without perspective and are often covered with words, especially Bible verses. Every painting also has a number: God had asked him to do 5,000 paintings to spread the gospel and Finster wanted to keep track.