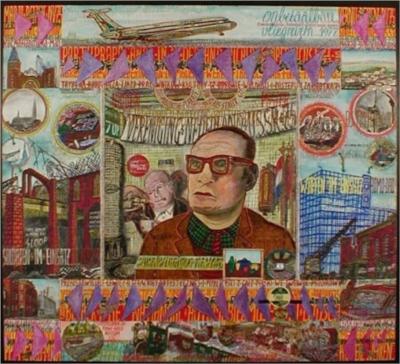 Willem van Genk (Born April 2, 1927 in Voorburg; died May 12, 2005 in The Hague) was a Dutch painter and graphic artist, celebrated as one of the leading masters of Outsider Art. Throughout his life he suffered from severe mental distress, experiencing symptoms related to autism and schizophrenia. On account of his passion for trains, buses, and train stations, he called himself the "King of Stations".

Van Genk’s panoramic cityscapes and fragmented collages express his feelings about modern authority, feelings which were shaped by an abusive father who, in addition to administering his own beatings, left him exposed to a traumatic experience at the hands of the Gestapo during the German occupation of the Netherlands in the Second World War.

Van Genk’s art has been widely exhibited in Europe, where it is also in many museum collections, including those of the Stedelijk Museum, the Dr. Guislain Museum in Ghent, the Collection de l’Art Brut in Lausanne, the Lille Metropole Musee d’Art Modern, d’Art Contemporain et d’Art Brut (LaM), the Croatian Museum of Naïve Art in Zagreb,and the Museum of Everything in London. Raw Vision, the leading magazine covering Art Brut, ranks van Genk among the “masters of outsider art.” At the beginning of 2005, which would later prove the year of the artist’s death, van Genk’s Keleti Station, now in the collection of the Museum of Everything in London, sold for a hundred thousand dollars at New York’s Outsider Art Fair, thus setting the record for most expensive work ever sold by a living outsider artist. On that occasion, Roberta Smith, the chief art critic of The New York Times, praised the piece “as the leading candidate for best in show.” [2] At least one other critic has identified van Genk as the most important Dutch outsider artist. Van Genk’s first major American exhibition is scheduled for Autumn 2014 at the American Folk Art Museum in New York City.

Willem van Genk: Mind Traffic, the first solo exhibition of the artist in the United States, is presented during the fall of 2014 at the American Folk Art Museum in New York City. It “focuses on his creative process, his recurring themes, and the diverseness of his aesthetic,” providing, as curators Patrick Allegaert, Yoon Hee Lamot, and Dr. Valérie Rousseau noted, a chronological overview of his oeuvre and a comprehensive understanding of van Genk’s mindset. To complement the presentation of his major artworks, Mind Traffic “includes a selection of documents and objects from van Genk’s living environment: an accumulation of favorite books from his library, handmade maps, personal notes, and his collection of raincoats.” In their published statement, the curators proposed an original perspective: “The artworks can be seen as memory palaces,” as they “depict intricately layered and densely networked urban panoramas and reference interconnectivity.”

Willem van Genk was born in 1927 in Voorburg, Netherlands. When he was five, his mother died, leaving the young boy dependent on his abusive father and, especially, his nine sisters. In school Willem was a poor student, except in art; playing to his strength, he preferred to doodle throughout the day instead of paying attention in class. He was especially weak in mathematics, which outraged his father, who forced Willem to add and subtract the number of blows as he beat him. Willem was expelled from primary school, and then failed at vocational school. He also began a sign-painting course, but did not finish it. These early failures and abuses fostered an inferiority complex, from which art was the only outlet. In art van Genk was exceptionally skilled, and he would use his skill to assume the perspective of a godlike overseer of the modern metropolis. During the Second World War, the Netherlands were occupied by Nazi Germany. Van Genk’s father was a member of the Dutch resistance, and hid Jews in the family home. Maddeningly, their fate is not recorded in the literature on the artist. In 1944 when Willem was seventeen years old, the Gestapo visited the family apartment in the Magnoliastraat in search of the father, who was not there. In his stead Willem was interrogated by the Gestapo, who beat the adolescent, subjecting him, in the words of his eldest sister, to "a few heavy clouts." This trauma was the origin of van Genk’s later obsession with long raincoats, as the Gestapo men on this occasion wore "high-buttoned leather jackets." This was a formative event in van Genk's life. As though appropriating their cloaks of power, van Genk would eventually collect hundreds of long raincoats, which he treated as a sort of fetish, a prophylactic protecting the paranoid artist against what he thought of as the ubiquitous threat of his enemies.