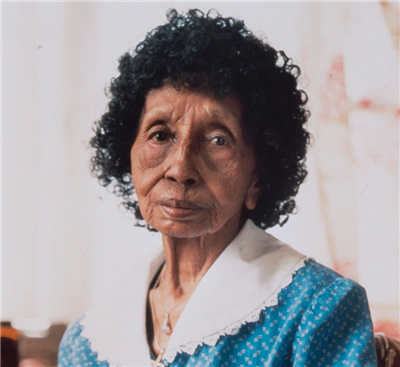 Clementine Hunter (pronounced Clementeen) (late December 1886 or early January 1887 – January 1, 1988) was a self-taught black folk artist from the Cane River region of the U.S. state of Louisiana, who lived and worked on Melrose Plantation. She is the first African-American artist to have a solo exhibition at the present-day New Orleans Museum of Art.


Hunter was born into a Louisiana Creole family at Hidden Hill Plantation, near Cloutierville, in Natchitoches Parish, Louisiana; she started working as a farm laborer when young, never learning to read or write. In her fifties, she began painting, using brushes and paints left by an artist who visited Melrose Plantation, where she then lived and worked. Hunter's artwork depicted plantation life in the early 20th century, documenting a bygone era. She sold her first paintings for as little as 25 cents. By the end of her life, her work was being exhibited in museums and sold by dealers for thousands of dollars. Hunter was granted an honorary Doctor of Fine Arts degree by Northwestern State University of Louisiana in 1986. In 2013, director Robert Wilson presented a new opera about her, entitled Zinnias: the Life of Clementine Hunter, at Montclair State University in New Jersey.


Born either in late December 1886 or early January 1887, two decades after the end of the American Civil War, Hunter's grandparents were enslaved. She was the eldest of seven children of Creole parents at Hidden Hill Plantation, near Cloutierville in Natchitoches Parish, Louisiana. Hunter's given name was originally Clemence, but she changed it after moving to Melrose Plantation. Her mother was Mary Antoinette Adams (d. 1905) and her father was Janvier (John) Reuben (d. ca. 1910), a field hand. Her parents were married on October 15, 1890. Her maternal grandparents were named Idole, who was formerly enslaved, and Billy Zack Adams. Her paternal grandfather was "an old Irishman" and her grandmother, "a black Indian lady called 'MeMe'" (pronounced May–May).


Hidden Hill was known as a harsh place to live and work, and local accounts say it was the inspiration for Uncle Tom's Cabin. It is now known as Little Eva's Plantation.


At the age of 15, Hunter moved to Melrose Plantation south of Natchitoches. She spent much of her life picking cotton and attended school for only 10 days, never learning to read or write.


Her first two children, Joseph (Frenchie) and Cora, were fathered by Charlie Dupree, whom Hunter said she did not marry. Dupree died around 1914. Later she married Emmanuel Hunter, a woodchopper at Melrose, in 1924. The two lived and worked at Melrose Plantation for many years. Hunter worked as a field hand in her early years there and then as a cook and housekeeper beginning in the late 1920s. Hunter bore seven children, two stillborn. On the morning before giving birth to one of her children, she picked 78 pounds of cotton, went home and called for the midwife. She was back picking cotton a few days later. Hunter lived her entire life in rural, northwest Louisiana, never going more than 100 miles from home.