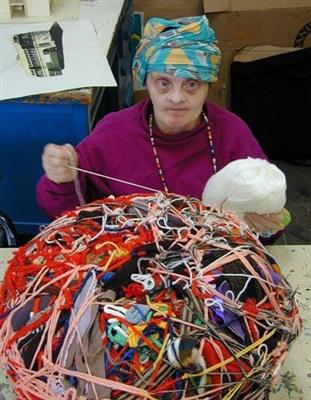 Judith Scott (May 1, 1943 – March 15, 2005) was American fiber sculptor, born with Down Syndrome and deaf. She was internationally renowned for her art. In 1987, Judith was enrolled at the Creative Growth Art Center in Oakland, California which supports people with developmental disabilities. There, Judith discovered her passion and talent for abstract fiber art and she was able to communicate in a new form. An account of Scott's life, Entwined: Sisters and Secrets in the Silent World of Artist Judith Scott (2016) has been written by her twin sister.


Judith was born into a middle-class family in Cincinnati, Ohio in May 1, 1943 along with her fraternal twin sister Joyce. Unlike Joyce, Judith was born with Down Syndrome. During her infancy, Judith suffered from Scarlet Fever, which caused her to lose her hearing, a fact that remained unknown until much later on in her life.


Judith Scott spent her first seven and a half years at home with her parents, twin sister and older brothers. Although the developmental gap between the two girls was apparent, "the parents consciously sought to treat these youngest members of the family alike."


However, when it was time for the girls to start attending school, Judith was found to be "ineducable." There was only one classroom for children with disabilities, and Judith was not able to pass the verbally-based entrance tests, due to her still undiagnosed deafness. Consequently, on medical advice, her parents placed Judith in the Columbus State Institution (formerly the Columbus State School), an institution for the mentally disabled, on October 18, 1950. This separation had a profound effect on both twins.


The records from Judith Scott's first few years at the Institution indicate that she had an IQ of 30 (based upon oral testing before her deafness was recognized). For this reason she was denied any training opportunities. Deprived of her twin, Judith became severely alienated, and behavioral problems soon surfaced. Her Clinical Record states that "She does not seem to be in good contact with her environment. She does not get along well with other children, is restless, eats messily, tears her clothing, and beats other children. Her presence on the ward is a disturbing influence." Soon after, she was moved to a smaller state institution at Gallipolis, Ohio.


In 1985, after 35 years of complete separation and lengthy and difficult negotiations, Joyce Scott became her sister's legal guardian, and brought Judith to live with her in California, a state where all mentally disabled citizens are entitled to an ongoing education.


Judith Scott died of natural causes at her sister's home in Dutch Flat, California, a few weeks short of her 62nd birthday. She outlived her life expectancy at birth by almost fifty years.


On April 1, 1987, Judith Scott began attending the Creative Growth Art Center in Oakland, one of the first organizations in the world to provide studio space for artists with disabilities. For almost two years, Judith showed little interest in any artistic activity. She was unexceptional with paint. She scribbled loops and circles, but her work contained no representational imagery, and she was so uninterested in creating that the staff was considering ending her involvement with the program.