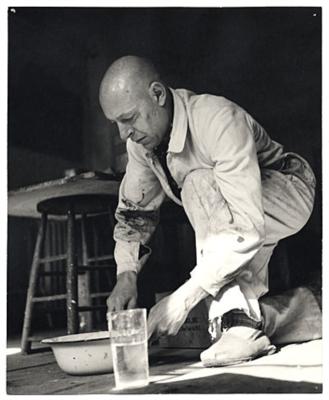 Jean Philippe Arthur Dubuffet (31 July 1901 – 12 May 1985) was a French painter and sculptor. His idealistic approach to aesthetics embraced so called "low art" and eschewed traditional standards of beauty in favor of what he believed to be a more authentic and humanistic approach to image-making. He is perhaps best known for founding the art movement Art Brut, and for the collection of works—Collection de l'art brut—that this movement spawned. Dubuffet enjoyed a prolific art career, both in France and in America, and was featured in many exhibitions throughout his lifetime.

Dubuffet was born in Le Havre to a family of wholesale wine merchants who were part of the wealthy bourgeoisie. He moved to Paris in 1918 to study painting at the Académie Julian, becoming close friends with the artists Juan Gris, André Masson, and Fernand Léger. Six months later, upon finding academic training to be distasteful, he left the Académie to study independently. During this time, Dubuffet developed many other interests, including music, poetry, and the study of ancient and modern languages. Dubuffet also traveled to Italy and Brazil, and upon returning to Le Havre in 1925, he married for the first time and went on to start a small wine business in Paris. He took up painting again in 1934 when he made a large series of portraits in which he emphasized the vogues in art history. But again he stopped, developing his wine business at Bercy during the German Occupation of France. Years later, in an autobiographical text, he boasted about having made substantial profits by supplying wine to the Wehrmacht.

In 1942, Dubuffet decided to devote himself again to art. He often chose subjects for his works from everyday life, such as people sitting in the Paris Métro or walking in the country. Dubuffet painted with strong, unbroken colors, recalling the palette of Fauvism, as well as the Brucke painters, with their juxtaposing and discordant patches of color. Many of his works featured an individual or individuals placed in a very cramped space, which had a distinct psychological impact on viewers. His first solo show came in October 1944, at the Galerie Rene Drouin in Paris. This marked Dubuffet's third attempt to become an established artist.

In 1945, Dubuffet attended and was strongly impressed by a show in Paris of Jean Fautrier's paintings in which he recognized meaningful art which expressed directly and purely the depth of a person. Emulating Fautrier, Dubuffet started to use thick oil paint mixed with materials such as mud, sand, coal dust, pebbles, pieces of glass, string, straw, plaster, gravel, cement, and tar. This allowed him to abandon the traditional method of applying oil paint to canvas with a brush; instead, Dubuffet created a paste into which he could create physical marks, such as scratches and slash marks. The impasto technique of mixing and applying paint was best manifested in Dubuffet's series 'Hautes Pâtes' or Thick Impastoes, which he exhibited at his second major exhibition, entitled Microbolus Macadam & Cie/Hautes Pates in 1946 at the Galérie René Drouin. His use of crude materials and the irony that he infused into many of his works incited a significant amount of backlash from critics, who accused Dubuffet of 'anarchy' and 'scraping the dustbin'. He did receive some positive feedback as well—Clement Greenberg took notice of Dubuffet's work and wrote that '[f]rom a distance, Dubuffet seems the most original painter to have come out of the School of Paris since Miro...' Greenberg went on to say that 'Dubuffet is perhaps the one new painter of real importance to have appeared on the scene in Paris in the last decade.' Indeed, Dubuffet was very prolific in the United States in the year following his first exhibition in New York (1951).